Millions of whites feel Charleston church killer 'could be my son' 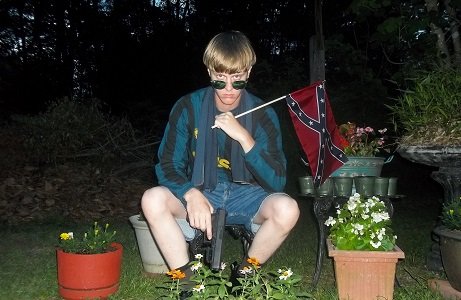 A website, lastrhodesian.com, registered and owned by Dylann Roof, featured a racist manifesto and mentioned Charleston, South Carolina, being chosen as the target of an attack. The website also displayed several images that appear to be Roof, the 21-year-old who shot and killed nine people during a bible study at Emanuel African Methodist Episcopal Church on June 17, 2015. (Photo: From LastRhodesian.com)

NNPA — On Wednesday, June 17, 2015, Dylann Roof, a 21-year-old white supremacist, massacred nine black worshipers in the historic Emanuel African Methodist Episcopal Church in Charleston, South Carolina. Among those slain at close range with a .45 caliber semi-automatic weapon, were an 87-year-old woman and Emanuel’s pastor, Rev. Clementa Pinckney, a South Carolina state senator. This atrocity was not only a premeditated stab at the heart of Black America, and one of the moral epicenters of the African Diaspora, it was the latest in a long history of calculated and explicit acts of racial terrorism perpetrated against African Americans.

This was neither random or without context. Yet, one week after the attack, I continue to hear many observers

describe their “shock” and “surprise.” Even a casual reader of American history, and an occasional news listener, would know that there has never been a cessation of racist beliefs and racial

conflict in America. White supremacists have never waived the white flag. The Confederate flag is their banner de jour. Indeed, racial tensions have only worsened of late. Almost daily we are bombarded with news of unarmed black people being shot while talking, walking, running, working, playing and now praying while black. Indeed, The Southern Poverty Law Center reveals that there has been a “30 percent increase in hate crimes since 2000.”

It reported that the number of so-called Patriot groups, including armed militias, skyrocketed following the election of Obama in 2008— rising 813 percent, from 149 groups in 2008 to an all-time high of 1,360 in 2012. The number fell to 874 in 2014, which is nearly six times higher than when Obama took office.

When I rejected a white male acquaintance’s attempt to describe Roof as a “misguided kid,” he angrily declared, “Roof could be my son.” As the “Oracle would say, “Bingo.” He, and millions more like him, identify with Roof. They grant the baby faced, salad bowl haircut wearing white supremacist the kind of absolution that many people of color can only imagine receiving were, Heaven forbid, the tables turned. They empathize with Roof. They do not see him first as the latest in a long line of racist mass murders— the most recent, hateful, violent personification of our grossly

unequal and unjust system, which is characterized and fueled by white dominance and disavowal of white supremacy. They see him not as the harbinger of violent bigotry, but an unwitting victim. Yes, as their son.

Perhaps this is why, as historian and public intellectual Brian Behnken recently observed, “Trayvon Martin buys skittles and an ice tea and ends up murdered. Dylan Roof murders nine black folks and gets treated to Burger King.” Apparently murderous white supremacists can also “have it their way.”

We must look courageously at the nature of white supremacy in America and the ways in which it defends itself at all costs. To my white brothers and sisters who have taken up the struggle and descended upon Charleston, signed petitions, written letters, donated to the cause and otherwise acted in the aftermath of Roof’s carnage, thank you for you support. Don’t stop! People of color need relief and you’re next up at bat. If true change is to be made, we will need all hands on deck— especially yours.