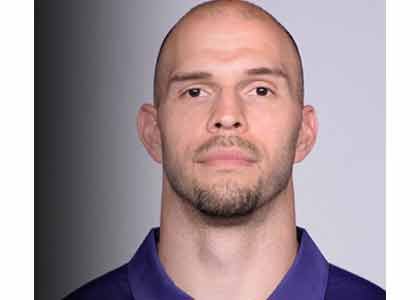 BALTIMORE — You never know when a big time opportunity will present itself in the NFL. The phrase, “I am always ready so I never have to get ready” is the mentality that anyone who is associated with the NFL has to have. The Baltimore Ravens new tight ends coach, Richard Angulo is an example of this. Angulo was promoted to the tight ends coaching position after he spent the 2014 season as an offensive coaching intern.

His role was a support role in which he worked with then offensive quality control coach Jay Harbaugh. Angulo’s primary duty was to provide statistical analysis along with self-scouting reports and breakdowns of opposing defenses. He was a part of an offensive coaching staff that led the Ravens to franchise records in total yards (5,838) and total points (409).

Angulo took part in the Bill Walsh NFL Minority Coaching Fellowship with the Minnesota Vikings in 2013. His coaching career started with a brief stint at Lake Forest (IL) College as the tight ends coach. He moved on to Trinity International where he coached an offensive line that gave up only 1.5 sacks per game in an offense that was tenth in the NAIA in 2012. Angulo’s offensive line paved the way for the school’s first ever back-to-back 1,000-yard rusher in 2012 and 2013.

The Ravens new tight ends coach actually played the position himself in the NFL with four different teams.

Angulo was drafted by the St. Louis Rams in the seventh round of the 2003 NFL Draft. He then went on to play for the Minnesota Vikings, Chicago Bears and Jacksonville Jaguars.

Recently, The Ravens selected two tight ends in the NFL Draft. Their second pick, Maxx Williams has said that his goal is to get stronger. Williams also said that he wanted to improve his blocking. Angulo’s background is a perfect match for the Ravens young tight end. Having a coach like Angulo who played the position and served as a strength/conditioning coach will help the team’s new tight end immensely.

Nick Boyle, the other tight end drafted by the Ravens drafted this year has already been impressive at the

Organized Team Activities (OTA) and mini-camp. Second year player Crockett Gillmore has taken most of the reps as a starter and has stood out very well.

Gillmore is likely to be the starter at the tight end position for the Ravens this season.

Coach Angulo will be the driving force behind the development of a young group of tight ends in Marc Trestman’s tight end friendly offense.