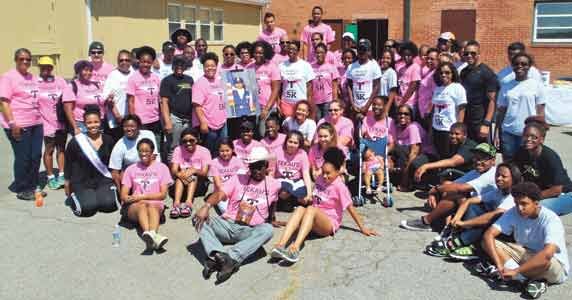 Judith Rasayon, (far left) and her husband, Dr. Niyana Rasayon (front and center) remember their daughter, the late Tekau Rasayon, along with family members, alumni of Surrattsville High School (SHS), friends and supporters. During the second annual Tekau’s Heart Memorial 5K Run/Walk, $1,100 was raised for a scholarship that will be awarded to the second college-bound recipient, Maurice C. Harris. (Photo: Andrea Blackstone)

Maurice C. Harris, 18, was awarded a scholarship to help with expenses while attending his first year at Prince George’s Community College, in memory of 17-year-old Tekau Rasayon. The announcement was made during the second annual Tekau’s Heart Memorial 5K Run/Walk on May 30, 2015 at Surrattsville High School (SHS) in Clinton, Maryland. Harris will receive a $1,100 check from money raised at this year’s event. 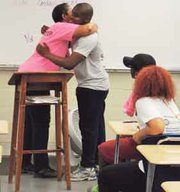 The Rasayon family started Tekau’s Heart Memorial Foundation to preserve the memory of the cadet colonel in the Air Force Junior Reserve Officer Training Corps (JROTC Unit MD-942) who was destined to do great things in life.

Tekau was a well-rounded 4.0 GPA student who had been accepted to numerous universities, but she wanted to remain in Maryland. The high school senior with interests in pre-law and public relations looked forward to attending Towson State University (TSU) after graduating from high school. Her plans were interrupted in 2012.

After Tekau Rasayon collapsed on the track at SHS, she was transported to Southern Maryland Hospital where she passed away. It was later determined that Tekau’s death was a result of an unknown heart condition called anomalous coronary artery (ACA). The congenital condition usually does not show up until the late teens or early adulthood. It is reportedly documented as the second leading sudden cause of death in young athletes. It rarely has symptoms, yet 50 percent of first incidences are usually fatal.

Dr. Niyana Rasayon described his daughter as “an incredible, phenomenal spirit.” He recalls Tekau’s playful personality and qualities that brought out the best in others. Along with Tekau’s mother, Judith Rasayon, he raises awareness about ACAs and created a scholarship for college-bound seniors who attended Surrattsville High School. Harris is the second scholarship recipient who wrote a winning essay that was selected by Tekau’s family.

“She [Tekau] passed away on a Wednesday, March 28, 2012 and that Friday we had an appointment scheduled to tour the university (TSU),” Judith said. “With this particular scholarship, we wanted to have one that would be accessible to students that were going to college (and) graduating from SHS. We wanted this to be for students that work really hard, but who may not be at the top of the class.”

Tekau was known as a high achiever with a big heart, giving spirit and cheerful attitude. Her attributes continue to manifest through the manner in which family and friends have managed to bless others despite their difficult loss. Tynisha Payton, her volleyball coach and gym teacher, mentioned that she will always remember Takau’s outgoing spirit.

SMSgt. Phyllis Dickerson, a JROTC instructor at SHS, was like a second mother to Tekau. Dickerson reminded JROTC students who attended the second annual Tekau’s Heart Memorial 5K Run/Walk how special Tekau was to all who knew her.

“Even those of you who didn’t know Tekau, I think you probably have a sense of who she really was by just being in our presence,” Dickerson said.

Sponsorship and support of the Tekau’s Heart Memorial 5K Run/Walk has evolved into a movement to give back to youth and unite the community beyond SHS. Miss American Jr. Teen Eastern Shore, 15-year-old Amber Glenn, attended the event and offered supportive words to Tekau’s family and friends. Effective Chiropractic Health and Wellness Center was a sponsor this year. Dr. Levy Riley III supported the event in-person with his wife, Jinean Riley.

The late teen’s mother, Judith expressed that she would like the sponsorship to grow. A long-term goal is to continue offering the scholarship and raising awareness for ACAs on a larger scale.

For more information or to make a donation, visit http://www.tekausheart5k.com.