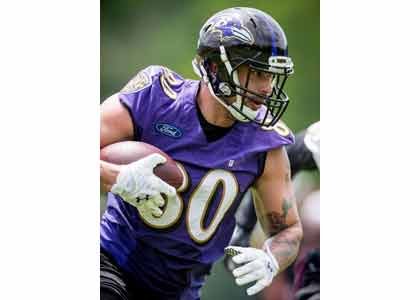 BALTIMORE — The 2015 NFL season will bring about an increased role for second-year tight end Crockett Gillmore. He was selected in the third round of the 2015 NFL Draft and came on later in the season as a contributor. A lingering hip injury to fellow tight end Dennis Pitta and the departure of Owen Daniels (last year’s starter) has opened the door for Gillmore.

Gillmore approached the offseason as a chance to get ready to take advantage of a huge opportunity. It was very clear that he put in a lot of hard work during the offseason. Gillmore reported to OTAs with a noticeably more muscular frame. Ravens head coach John Harbaugh was quick to point out that he was impressed with Gillmore. “What I’ve noticed mostly about Crockett is the change physically. He was a big guy before, but now he’s really [big].” Harbaugh continued; “He’s packing a lot of muscle on that [frame] – 275 pounds. He looks the part.”

Last year was a chance for Gillmore to really get involved by blocking in the run game. It was something that he felt that he had to make himself into in order to compete last season. He worked to further develop those skills by attending an offensive line coach this offseason. Playing in the trenches requires a great deal of strength which was something that Gillmore focused on increasing.

The 15 pounds of muscle that he gained is very evident when seeing him in uniform. In Gillmore’s opinion, it was absolutely necessary. “I just went back to training. Really, it was a long season, so you get some recovery, but then it’s back to the weight room.” Gillmore said; “That’s the biggest thing for me. To me, I felt like I needed to work on my routes and catching the ball, so that’s what I did. Fundamentally, from the weight room standpoint, I kind of put on some weight and got a little bit stronger.”

As a result of the muscle gain, Gillmore feels faster and feels like he has more power to get in and out of his breaks. The results showed during mini-camp as Gillmore was constantly getting open in the middle of the field and making catches. Steve Smith Sr. put it best when he said that Gillmore has the ability to not only get open, “he has a knack for being wide open with no one around him.”

There weren’t too many players that made more catches than Gillmore during OTAs and mini-camp. The Ravens did draft two tight ends in the 2015 NFL Draft. It is no secret that the tight end position is one that the organization wanted to address.

The other tight end that they drafted was Nick Boyle in the fifth round. He was brought in because of his blocking skills. The addition of these two players is something that Gillmore has no problem with. “Welcome to the Ravens. That’s their job to come in here and help the team just like it was my job last year. We’re going to continue to do that, and we’re going to continue to do whatever we can to really push that position to be one of the best groups in the league.” Gilmore said.

The upcoming season will be one where Gillmore can progress as a player. He isn’t a one-trick pony. In fact, he is a blend of the two tight ends that the team selected this year. Gillmore will surprise some with his soft hands and ability to get more yardage after the catch. He is also a reliable blocker.

The year 2015 could also call for an increased role in life. Gillmore recently proposed to his girlfriend Hayley Thompson on July 4th and she said yes.