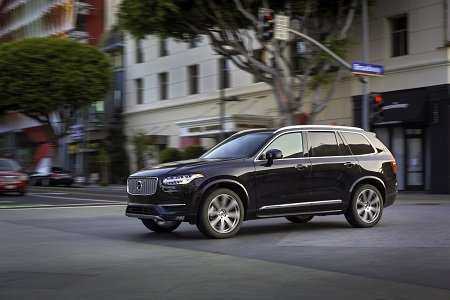 SANTA MONICA, CALIF. — Now that Volvo has been left alone by its new Chinese owners, an opposite tack from its former corporate parent, the Swedish automaker can get back to being itself. That was evident here as Volvo unveiled its XC90 three row sport utility.

The 2016 Volvo XC90 is a significant new vehicle on several levels. It signals Volvo’s climb into the ranks of luxury automakers. It also signals technological advancements. And it is the beginning of a product onslaught that will make the 2016 XC90 the oldest vehicle in Volvo’s lineup by 2018.

First up is power. For the U.S. market, the XC will be propelled by 2.0-liter, four cylinder Drive E engines. There will be two versions: one for the 2016 Volvo XC90 T6, the second for the T8. But it is not what you think; both engines are identical technologically advanced 2.0-liter four cylinders.

The T6 engine had a supercharger and turbocharger working together on the 2.0-liter, four cylinder that made 316 horsepower and 295 pound-feet of torque. The T8 XC90 had what Volvo is branding a twin engine. The same four-cylinder power plant, this time rated at 313 horsepower, is combined with an electric motor. Together they make 400 horsepower and 472 pound-feet of torque. The T8 is a plug-in hybrid; both engines were mated to eight-speed automatic transmissions.

All 2016 XC90s sold here will be all-wheel-drive models. But for fuel economy their AWD system will be front-wheel-drive based capable of sending half of the vehicle’s torque to the rear wheels when needed.

We test drove the T6 and the T8 and found neither lacking in power or agility. Handling was good, especially for a sizable sport utility with three rows of seats. And both of our testers had the top of the line air suspension.

The T6 got 20 mpg in the city, 25 mpg on the highway and 22 mpg combined. The T8 got 59 MPG in the city. Highway numbers were not available at the time of the test drive. The T6 could get from, zero to 60 mph in 6.1 seconds while the T8 could do it in 5.3 seconds and the pair have a top speed of 130 mph. Remember, both were hefty sporty utilities with curb weights of 4,627 pounds for the T6 and 5,059 for the T8. It was the low-end torque that moved them quickly from a standing start.

Still, neither felt overweight and both were fairly agile and they were well balanced as we drove through the mountains and canyons here with their twisting, tightly curved two lane roads. What’s more, the blowers enabled the T6 and the T8 to get up and over and through the mountain roads without the straining that normally comes with four cylinder engines at altitude. In addition, both the T6 and the T8 can tow up to 5,000 pounds.

Although an official said Sweden was not considered in the development of the new XC90, we don’t think so. Gasoline costs somewhere in the neighborhood of $8 per gallon in the Scandinavian country as well as the rest of Europe. That had to play a role in the company’s development of high-powered, small displacement fuel efficient Drive E engines.