Why we need to support normalizing all relations with Cuba 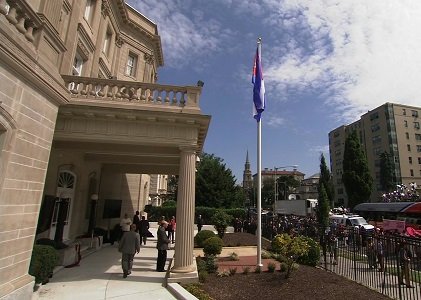 One bitter holdover of the Cold War slipped into the history books at 12:01 a.m. Monday, when the United States and Cuba re-established diplomatic relations. For the first time since severing ties in 1961, they reopened embassies in each other's capitals. (Pool Photo)

President Obama said that 55 years of isolating Cuba has not worked as a reason for re-establishing diplomatic relations with Cuba. Kudos to President Obama. The US. still continues its economic embargo of Cuba.

Nelson Mandela provided a great response to anyone who would ask why blacks should support complete normalizing of relations. A questioner at a New York Town Hall meeting asked why he would hold Fidel Castro as a leader in human rights when he has one of the worst human rights records according to the U.S. government.

Mandela said, “One of the mistakes which some political analysts make is to think that their enemies should be our enemies. That we can’t and we will never do.” He went on to say, “Our attitude towards any country is determined by their attitude to our struggle.” I would have added, “The U.S. assessment was politically driven and wrong.”

According to the Chicago Council on Global Affairs, 67 percent of the people in the U.S. support ending the 55-year embargo. For the last 23 years the UN General Assembly voted overwhelmingly to vote against the U.S. embargo against Cuba.

Getting back to Mandela, many people of the Cuban population share diaspora roots through the slave trade and confronting racial oppression with blacks. The U.S. civil and black rights movements strongly united with the 1959 Cuban revolution and third world struggles against colonialism and imperialism.

Cubans gave their lives to support African struggles. Cuban support was the tipping point in the defeat of apartheid South Africa. Cuba has sent medical personnel around the world including Haiti and Ghana to help combat deadly diseases. Cuba offered to send medical personnel to help Katrina victims. It trained thousands of doctors including African Americans.

No, Cuba is not perfect concerning race matters. Let’s say racism was produced through a socio-political economic environmental stain that soiled our clothing. In the U.S. it has been permanent. It remains in the air although through hard work some could be removed. Witness the oppressive conditions that produced the recent Baltimore uprising.

In Cuba, its 1959 revolution produced ingredients that removed permanent socio-political economic environmental stains. Many were rooted in Cuba’s 1959 pre-revolutionary history that included U.S. domination, the US embargo and the demise of the Soviet Union. Still, well over 95 percent of the Cuban people support the revolution.

So we need to renew or make new our solidarity with Cuba. Maybe we can learn how to remove our old stains permanently.