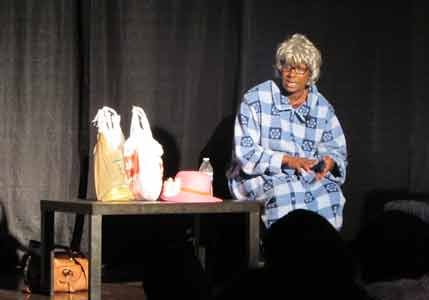 BALTIMORE — Usha Tyson has been successful in the Baltimore theater scene performing in stage plays from local writers and directors. The last couple of years she has been part of “Humdadao” a play produced and written by Baltimore’s very own Donnie Manuel, where she played lead character Tara.

“I really had a great time with ‘Humdadao.’ The cast was great. The script was fun and the one thing I loved about being in that play, was the fact that it was clean. No cussing or profanity. Everyone could come and see that show,” says Tyson. It was because of that experience that she chose to work with Manuel again in a one woman show based on Ms. Brown, one of the characters from “Humdadao.”

“Ms. Brown is a trip. She’s a little out there but she means no harm and in a lot of ways she has a lot of wisdom. The challenge for me was being up to that role, doing this one person, or one woman performance, remembering lines, and engaging the audience. The first time I was really nervous and not sure what to expect. The more I did it, I was able to get comfortable and really bring her to life,” states Tyson.

What’s next for the up and coming actress? “Well I am in Atlanta now looking to expand on my acting. Hopefully we can do a tour with Ms. Brown. I will be between ATL and B-More doing shows.”

If you have not had the chance to see Usha Tyson perform, friend her on Facebook, www.facebook.com/usha.tyson to see where she will be performing next and to catch the next performance of “Ms. Brown.”