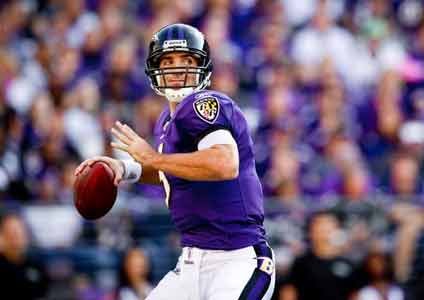 BALTIMORE — The start of training camp is right around the corner for the Baltimore Ravens. The rookies report today and the veterans are set to report on July 29th. Over the next few days, we will do a position by position training camp preview of the Ravens. Today we will lead off with the quarterbacks.

Joe Flacco: Quarterback is one of the more secure positions for the Ravens. Joe Flacco may not put up the gaudy stats that some of the other quarterbacks do but he is certainly worthy of being ranked among the best in the NFL. He is coming off of his best year statistically as he passed for 3,986 yards and 27 touchdowns. The addition of Marc Trestman as offensive coordinator will be a great match for Flacco’s ability. Trestman likes his quarterbacks to push the ball downfield to the seams and to the deep crossing routes. Flacco has a big arm and can get the ball to his receivers with a great deal of accuracy. He looked very sharp in OTAs and mini-camps and will look to continue to take advantage of a variety of weapons on offense.

Matt Schaub: Schaub was brought in to give the team a veteran backup quarterback. His best days are behind him but it will be good for Flacco to have a fellow veteran quarterback to get perspective from when he comes back to the sideline after a series. Schaub struggled a bit in OTAs and mini-camp when he threw a few interceptions.

Schaub will need to work on not telegraphing his throws and forcing them into tight spots which has resulted in some devastating interceptions in his past years as a starter. He needs to play well in the preseason to earn the trust of the Ravens’ coaching staff and truly solidify his spot as the backup quarterback.

Bryn Renner and Jerry Lovelocke will battle for a possible roster sport as the scout team quarterback. Lovelocke is a local product (Edmondson-Westside) that was an outstanding dual threat at Prairie View A&M. He will have to showcase the same electrifying playmaking ability that he did in college during the preseason if he wants to push for a roster spot. Lovelocke has a big arm and can make plays when things break down in the pocket.

Renner is more of a rhythmic passer that has the arm strength to make the throws that are required in Trestman’s offense. He is a longshot to make the roster.