Obama's sister: 'My brother has carried our name up there' 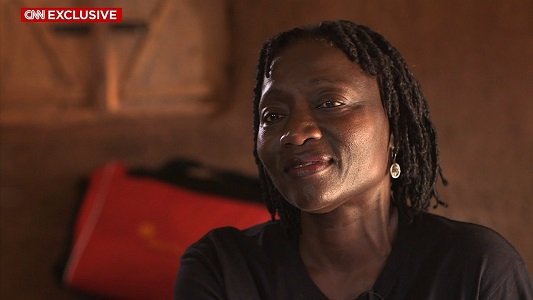 KOGELO, Kenya (CNN) — Auma Obama is fiercely protective of her half-brother -- the President of the United States.

She calls it "self-preservation."

Auma Obama welcomed CNN's Brooke Baldwin exclusively into the family home of the President's ancestral village -- even introducing her to their shared 93-year-old step-grandmother, Mama Sarah.

And, it became apparent in the few days Baldwin spent with the woman who shares a father with the American leader that, even growing up on opposite ends of the earth, Barack and Auma Obama are family.

Auma Obama commented on the President's rendition of "Amazing Grace" during his eulogy for the pastor and victims killed in last month's Charleston church shooting.

"I'm surprised he sang so well," she said.

Barack and Auma first met in Chicago when they both were in their twenties, after the President invited her to the United States in a letter. While their shared last name has opened many doors for Auma Obama, she's built a Kenya-based foundation, Sauti Kuu, from the ground up.

It has become her life's mission to help disadvantaged children bring themselves out of poverty and become self-sustaining.

She considers herself a strong woman -- taking a page from the likes of her sister-in-law, Michelle Obama, for whom she was a bridesmaid, and Hillary Clinton, who she calls a "friend."

"I got to know her and she was really nice, I was really impressed with her. Strong woman -- really strong woman," Auma Obama said of the presidential candidate.

She said their father would be proud of what his son, the American commander-in-chief, has achieved.

"I'm proud of our name because my brother really has carried our name up there," she said. "It's made our mark in the world."

"It tells every child that if you work hard -- you can do whatever you want in this world. You can make your future. So, what I'm trying to do here, he has done."