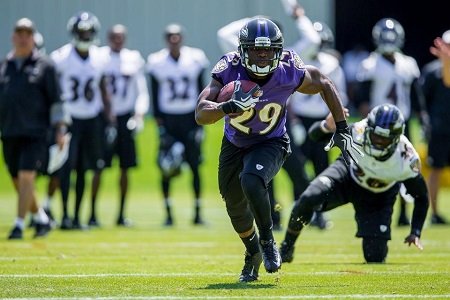 BALTIMORE — The Baltimore Ravens were able to reincarnate their running game last season under then offensive coordinator Gary Kubiak. Kubiak will be kicking off training camp as the head coach of the Denver Broncos this year. New offensive coordinator Marc Trestman plans to use a similar zone running scheme this season. Trestman is also known for getting the ball to his backs out of the backfield which is a good thing for some of the backs currently on the roster.

Forsett is coming off of a career year and is entering training camp as the starter for the first time in his career. He is the perfect runner for the zone scheme because of his ability to change running lanes and find designed cutback seam to run through. Forsett had the most runs of over 20 yards in the NFL last season. Prior to last year, he made his mark as a third down back because he is a viable receiving option out of the backfield. He was a frequent target of Joe Flacco in OTAs and mini-camps.

In the rotation: Lorenzo Taliaferro

Taliaferro reported to mini-camp with a leaner body and looked very quick on his feet. He will work primarily with the second team but is very likely to see a large share of carries in short yardage situations. Taliaferro is very good in pass blocking situations as well.

Buck Allen is a very good fit for Trestman’s offense. He excelled in a similar zone scheme at USC. Allen is very good at making one cut and getting up field in a hurry. He was very impressive at mini-camp and feels that the Ravens rushing attack will benefit from his running style. Allen also caught his share of passes out of the backfield while in college. He averaged 11.3 yards on 63 receptions.

Toussaint had an impressive preseason last year. He didn’t make the roster but was kept mostly on the practice squad. Toussaint is another back that can catch the ball out of the backfield, especially on screens. He can also double as a return guy for the Ravens.

Magee is a longshot to make the roster. He signed with the Ravens as an undrafted rookie free agent out of LSU. At 5-8, 213 pounds, he is a load to bring down.

Juszczyk has carved out a niche for himself as a do it all back. He can deliver punishing blocks leading the way for running backs. Juszczyk is also a trusted option in the receiving game. His college success as a tight end shows in how naturally he catches the football. Juszczyk can line up as an H back as well as a flex Y.

Kiero Small played football at Gibbons High School, formerly in Baltimore. Small earned a reputation as a tenacious blocker while at the University of Arkansas where he literally broke a defender’s facemask when blocking him. He spent some time on the Ravens practice squad last year after a stint with the Seattle Seahawks and Cleveland Browns. Small is a safe bet to turn some heads but is not likely to land a roster spot unless there is some kind of injury to Juszczyk.