What are your rights during a traffic stop -- and is it wise to exercise them?

Experts: An officer can order a driver out of the car, but there must be perceived danger 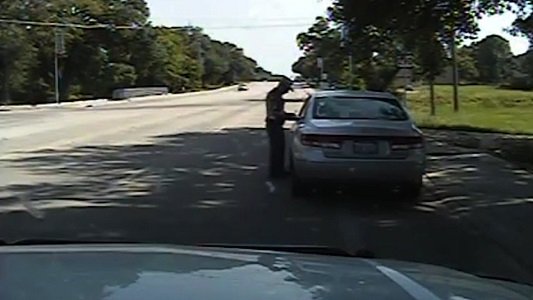 The dashcam video shows Texas state Trooper Brian Encinia pulling Bland over July 10, 2015, for allegedly failing to use her turn signal. What started as normal conversation gets testy after Encinia asks her to put out her cigarette and Bland refuses to put it out and step out of her car. (Photo: Texas Department Public Safety)

No one can know what went through Sandra Bland's mind when she was pulled over last week for what a Texas police officer later said was her failure to signal a lane change.

Chances are, it couldn't have been good. Most people feel at least some anxiety when they see those flashing lights behind them. What exactly happened during Bland's stop is unclear, as are the circumstances behind her death in a jail cell three days later.

But the contentious encounter between the officer and Bland has left many wondering what exactly they have the right to do when pulled over and, realistically, whether it's wise to exercise those rights.

The first thing an officer is looking out for is his or her safety. A driver should turn off the car, roll down the window, stay inside the car and put their hands on the steering wheel, or at least make it clear that there's nothing in their hands and they aren't reaching for anything. "The officer doesn't know who you are," said Cedric Alexander, CNN law enforcement analyst and the public safety director of DeKalb County, Georgia.

The officer should explain why he pulled you over and will ask for your license, registration and proof of insurance.

At this point, it's in both the officer's and the driver's best interest to act in a way that de-escalates tension, Alexander and other law enforcement experts agree.

In Bland's stop, the officer can be heard saying, "You seem very irritated."

To attorney and CNN legal analyst Joey Jackson, that appears to be a way to rile Bland up. Jackson said his father was a police officer who always told him that his biggest weapon was his ability to communicate and calm a situation. The Texas officer "seems to be escalating," the encounter, Jackson said.

While there's no legal rubric governing a person giving attitude, CNN legal analyst and longtime criminal defense lawyer Paul Callan said the verbal exchange between them is something the officer should not have allowed to happen. "Ironically, the motto of the Texas State Troopers is 'Courtesy, Service, Protection,'" said Callan. "We don't see much courtesy or protection going on in that encounter."

The officer asks Bland to put out her cigarette.

Legally, she's within her rights to continue smoking, Callan and others experts said.

If an officer feels in jeopardy by the actions of a driver, he can demand that driver stop whatever they're doing.

In Bland's case, Callan said he doubts her smoking could be presented in court as a danger.

Bland "could flick the cigarette at him?" Callan wondered.

If an officer feels any threat whatsoever, he or she can order someone out of their vehicle, said CNN legal analyst and attorney Danny Cevallos.

That right was established in a 1977 Supreme Court case that found Pennsylvania police officers were justified in instructing a man named Harry Mimms, whom they had pulled over for an expired license plate, to get out of his car.