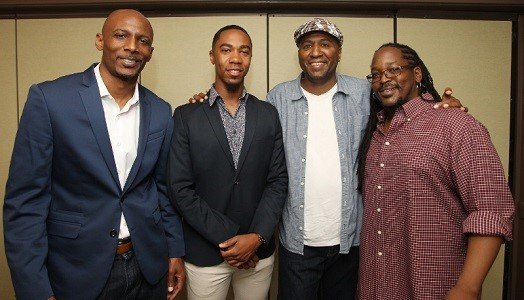 A series of exciting events began to unfold in Richard T. Fields’ life in May and June of this year. Although the 26-year-old recently earned his master of fine arts degree (MFA) in Film and Electronic Media from American University (AU) in Washington, D.C, he has already begun to gain noteworthy recognition as a filmmaker. The Prince George’s County, Maryland native who served as a 2015 student commencement speaker at AU also won the first McDonald's Lovin' Video Competition.

“Coming through film school, we have a lot of supervision and oversight for our projects. This contest was really the first project that I wrote and directed on my own without critique of professors. The fact that I was able to win this contest kind of gives more confidence in my ability to write, create, direct new things that people are really receptive to. It really makes me want to continue to do that,” Fields said.

To complement McDonald's new "Lovin'" campaign, 72 entrants who participated in the nationwide contest were challenged to create one 90-second to two-minute film, displaying their definition of love. Fields explained that the idea for his submission, "Puppy Love" evolved from life experiences. Fields credits his mother, Michelle Phipps, as being his biggest supporter.

“I was raised by a single mother. I am an only child and I am very close to my grandmother as well. So those elements were put into the film. And then a lot of people on my father’s side of the family, including my dad, are all military people, so I built that element in there as well,” Fields said.

Fields had an immediate idea to combine those concepts after Sonya Dunn—a colleague with whom he worked on another short film—forwarded an email to him about the competition. While filming the winning entry in Maryland, Fields aspired to send a message about the sacrifices of military families, along with other messages.

“After a young girl’s mother leaves for war, she (the young girl) finds love through a new friend,” Fields said, referring to the theme of his short film. “I was trying to send that message, and I tried to do it in a way that was relatable to everyone, even if it’s not a military family. I feel like everybody can relate to a parent having to go do something that your child doesn’t exactly understand at that point in time. We don’t always understand the decisions that our parents are making in that actual moment, even if it is to our benefit.”

McDonald's USA and the American Black Film Festival partnered to offer up-and-coming filmmakers an opportunity to compete to win a film equipment package valued at $2,500, have a film featured on prominent websites, such as McDonald's 365Black.com, and receive mentoring from Malcolm D. Lee. The writer and director is well known for his work, “The Best Man” and “The Best Man Holiday.” Along with Fields, Brian Shackelford of Los Angeles, California; and Travis Dent of Baton Rouge, Louisiana were selected to attend the 19th annual American Black Film Festival in New York City on June 11-14.

Winning a gift certificate that will enable Fields to purchase his own film equipment was perfect timing. The new AU graduate who once had access to equipment at the university can continue working on new film projects, while starting a production company.

“What’s on my plate right now is I just completed a short film called “Courting Lewis Baker,” which is a roughly 15-minute short drama about a young man who is searching to reconnect with his father. I’m in the process of submitting that in the film festivals to hopefully get that more exposure. And while that’s going on, I’ve written a feature film. I’m writing my second one, and one of those two projects should be the next film that I make.”

Additionally, Lee’s mentorship helped Fields to receive industry advice for a great portion of a day. He also found out some steps that Lee took to build his career.

“What was nice to hear was what he [Lee] was telling us his story about how he got started. A lot of the things that he was doing at this [my] age are the same things that I’m doing right now,” Fields said.