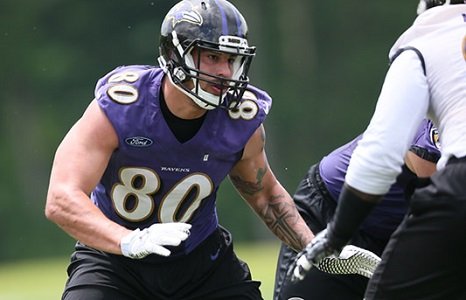 BALTIMORE — The tight end position will take on a key role for the Baltimore Ravens in Marc Trestman’s offensive scheme. Quarterback Joe Flacco has always liked throwing the ball to his tight ends, especially in third down situations. Owen Daniels, last year’s leader in receptions by a tight end, moved on to the Denver Broncos with new head coach Gary Kubiak. The Ravens made it a point to address this position in the draft.

Gillmore is a big target for Flacco. He put on around 15 pounds of muscle during the off season and drew praise from head coach John Harbaugh for his physique. He assumes the starting role and judging from his performance during OTAs and mini-camp, he doesn’t plan to give it up. Gillmore has a knack for getting open and will always make the tough catch. He uses his big body to get position on a variety of in breaking routes and can cause problems in the seams. Gillmore is also a very solid run blocker.

The Ravens will utilize a good amount of 12 personnel (2 TE sets) and when they do, Maxx Williams will be the second tight end that comes into the game. Williams is a very good receiving tight end that can be flexed out wide and cause some matchup problems. He instantly becomes one of the Ravens best red zone options. Williams has soft hands and some run after the catch ability. He is young and will need to improve his run blocking ability.

Nick Boyle is a very good run blocker. He was known more for blocking coming into OTAs and mini-camp but he was also an impressive receiving option working the middle of the field. Boyle caught the ball well during OTAs and mini-camp which was a surprise. He will likely be the first option when the Ravens use jumbo or big sets which employ three tight ends.

Reisner is entering training camp with his third team in four years. It will be difficult for him to crack the roster unless the Ravens carry four tight ends which is something that they have done in the past.

Reuland is in his third year in the NFL after spending the past two seasons with the New York Jets. He has some experience in the west coast offense dating back to his days at Stanford University. Reuland will be the other option for the Ravens if they decide to carry four tight ends on the roster.

Pitta has become a favorite target for Flacco. He is recovering from his second season ending hip injury. Pitta was able to get some work in prior to practice and during individual periods during OTAs and mini-camp. He just isn’t ready to go full tilt and hasn’t been cleared to practice by team physicians.