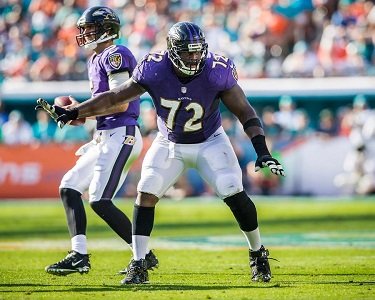 The Baltimore Ravens were able to run the ball very consistently last season thanks to the offensive line. There has been a good amount of praise being heaped upon the Ravens line during the off season. While many rank the Dallas Cowboys line as the best in the NFL, quite a few people have the Ravens line as a close second. A lot of credit goes to offensive line coach Juan Castillo for the work that he has done to improve this unit. Continuity is something that they have not had in the past. Going into training camp, the Ravens appear to have all five starters coming back healthy.

Eugene Monroe is coming off of a year in which he struggled a bit. He missed five games due to injury. As a result, the focus of his training was on injury prevention. He underwent a bit of a body transformation and now carries more lean muscle. This has him feeling lighter on his feet and he said that it will help him improve his stamina.

Kelechi Osemele took part in all voluntary and mandatory workouts. Osemele is in a contract year and makes up half of what many call the best guard tandem in the NFL. He is another year removed from a back injury that cost him a large part of the 2013 season. Osemele started all 16 games last year. He hopes to do the same in 2015 which is a contract year for him.

Jeremy Zuttah fit in perfectly for the Ravens last season which was his first with the team. He had surgery to clean up bone spurs that affected his hip when he got into the three point stance. The surgery was clean but Zuttah didn’t take part in off season activities. He is expected to be ready to go for training camp.

Marshall Yanda is one of the most technically sound offensive linemen in the NFL. He is also one of the strongest. Yanda is regarded as an elite guard and should be paid accordingly. He was a key to the Ravens ability to run the ball so well last season.

Rick Wagner stepped in at right tackle and played really well in his first season as a starter. Wagner suffered a Lisfranc injury last season. The foot injury has kept him out of offseason activities but he is expected to be ready for training camp. He no longer has pain in his foot but he will be brought along slowly during training camp.

John Urschel filled in admirably at guard when called upon last year. He also has the ability to play center. He took most of the first team reps at center while Jeremy Zuttah was out during the off season activities.

James Hurst was a value addition as a rookie free agent last season. He stepped in at tackle and started five games for the Ravens last year.

Robert Myers is a personal project for Coach Juan Castillo. Affectionately known as “Snacks”, Myers is a feisty offensive lineman that will get better as he makes the transition from Tennessee State University to the NFL.