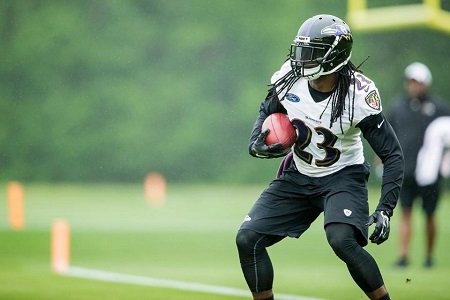 BALTIMORE — The Baltimore Ravens faced an unprecedented amount of injuries to the cornerback position during the 2014 NFL season. As a result, the secondary only had six interceptions last year. Many thought that the Ravens would address the cornerback position with an early selection in the 2015 NFL Draft. The secondary will benefit from having some key players returning from injury.

Jimmy Smith signed a four year extension with the Ravens during the off season. He worked to return from a foot injury that cost him most of the 2014 season. Smith was active in offseason activities but was not a full participant during team periods. He should be ready to go for training camp and will be looking to continue to establish himself as one of the game’s best young corners.

Will Hill was a solid addition during training camp last season and is back after signing a one year deal. He took over as a starter at safety last season and has worked primarily with the first team so far. Hill is an aggressive safety that will lay big hits on the ball carrier. He also presents a good match up for tight ends that teams get heavily involved in the passing game.

Kendrick Lewis showed some range and ball skills during offseason workouts. He will be the first team free safety when training camp starts. Lewis brings a much needed veteran presence to the Ravens secondary.

Lardarius Webb looked like he was fully back after fighting a few injuries last season. He continues to be an anchor in the secondary because of the fight that he has in him. Webb will battle taller receivers in jump ball situations and has the agility to stay with the smaller, quick slot receivers.

Arrington is a hometown kid that will be a valuable option in nickel packages. He comes to the Ravens after winning a Super Bowl last season with the New England Patriots. Arrington struggled against the Seahawks 6-5 wide receiver Chris Matthews during the Super Bowl before being benched for Malcolm Butler. It is unlikely that the Ravens put him in matchups on the outside. They’ll probably use him exclusively in the slot.

Asa Jackson was the Ravens nickel option prior to getting injured. Injuries have unfortunately been an ongoing issue with Jackson. When healthy, he can cover pretty well against slot receivers. Last year he worked on being able to hold his own out there on the island that the Ravens man coverage scheme puts their corners on. He will need to continue to progress in that area in order to wrestle playing time away from Arrington.

Matt Elam is surely on the hot seat this year. General manager Ozzie Newsome said that he expects to see a better performance from the former first round draft pick. Elam needs to cut down on the large amount of missed tackles last season. To his credit, Elam did look much better during offseason workouts. The truth will come out once the pads go on.

Anthony Levine was pressed into action at corner when the team suffered a rash of injuries last year. He played well and showed that he could be a reliable option at either corner or safety. The Ravens like versatility so Levine is someone that they’ll give every chance to prove his worth during training camp.

Walker is a fourth round pick that the Ravens personnel department really liked. He is a long corner that really likes to press at the line of scrimmage. Walker is lean but has very good movement skills and can play corner or safety.

Special teams could be the saving grace for Jacobs, Melvin or Trawick. The same could be said for Asa Jackson. The Ravens have a large number of quality defensive backs which will make it hard for these players to get the snaps to secure a spot on the roster.