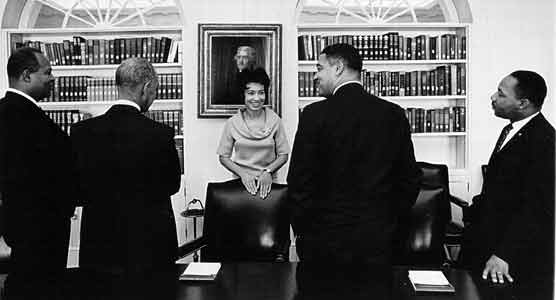 WASHINGTON — For many, President Lyndon B. Johnson is chiefly remembered for escalating the United States military involvement in Vietnam. However, his legacy is much more than his role in the Vietnam War. In fact, Johnson engineered the passing of two of the most important laws Congress ever approved: the Civil Rights Act of 1964 and the Voting Rights Act of 1965.

As we celebrate the 50th anniversary of President Johnson's signing of the Voting Rights Act on August 6, 1965, “JFK & LBJ: A Time for Greatness” airing nationally, Tuesday, August 4, 2015 from 9-10 p.m. on PBS examines how Johnson meticulously worked behind the scenes to outwit the Southern segregationists who were determined to maintain the racial divide. He cajoled, flattered, wheeled and dealed, using all the tricks he had learned as a long-serving Senator, to ultimately transform America.

Narrated by Morgan Freeman, JFK & LBJ is from the team that produced JFK: OnePM Central Standard Time, which aired on PBS in commemoration of the 50th anniversary of the assassination of President Kennedy. The dramatic events are told through rare archival footage and reenactments with actor Mark Murphey as Johnson and Dené Hill as Geraldine Whittington, who Johnson hired, the first African American secretary to the President.

Featured in the documentary are Whittington's school friend Alma Cropper and cousin Gladys Holt Peevy who reflect on the significance of Whittington's hire to the African American community.

The exchange, like others in the film, seamlessly position Murphey with the actual recorded voice of the historical figure.

Two days after Kennedy's burial, Johnson delivered a speech that made known to America how he would ensure Kennedy's legacy.

"No memorial oration or eulogy could more eloquently honor President Kennedy's memory than the earliest possible passage of the Civil Rights bill for which he fought so long."

The Civil Rights Act of 1964 is considered one of the crowning legislative achievements of the civil rights movement, but the Voting Rights Act that followed the next year changed the country forever.

JFK & LBJ details how the Selma to Montgomery marches coupled with Johnson's historic, nationally televised "We Shall Overcome" speech before a joint session of Congress on March 15, 1965, led to the passage of the Voting Rights bill protecting the rights of minorities.

"That was the first time hearing an American president using the theme song of the Civil Rights movement," said U.S. Representative John Lewis for Georgia's 5th congressional district, who is featured in the documentary. "I looked at Dr. King. Tears came down his face. He cried. And we all cried a little. And he said: 'We will make it from Selma to Montgomery. And the Voting Rights Act will be passed.' And he was right."

How did a man like Johnson - raised, as the film demonstrates, with the racial prejudices of his time - became a champion of equality?

The documentary chronicles Johnson's extraordinary moral journey through interviews with those closest to him and those involved in these historical events, including Senior Presidential Aide Joseph Califano, Civil Rights adviser Harris Wofford, and principal speechwriter Richard Goodwin (the man who penned Johnson's famous 'We shall overcome' speech).

Among his other accomplishments, Johnson sent a signal to America to end Jim Crow segregation by walking into The Forty Acres Club, a totally white club, with Whittington on his arm; appointed Thurgood Marshall to the Supreme Court, the Court's first African-American justice; instituted the programs of the Great Society (i.e., public broadcasting, Medicare, Medicaid, environmental protection, aid to education, the abolition of poverty) and more.