Fit Nation: Swimming past African-American issues with fear and competency in water

Water exercising and swimming can have tremendous health benefits 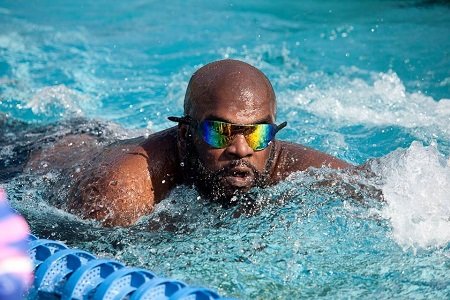 (CNN) — When I told my dad that I was going to be in a triathlon, he said, "You know you have to swim in the ocean. Do you know how to swim?"

And I thought to myself, "Do I really know how to swim?" When I was young, my dad would often pass down knowledge from his grandmother, Ruth Greenidge, who emigrated from Barbados to Boston, about swimming in the sea: "Only fools and fish swim in the ocean."

He told me she would only go waist-deep to wade in the water because she knew the dangers that could lie in the murky waters. This familial proverb was passed down from generation to generation and seemed to convey that African-Americans really did not belong in, and should be fearful of, the water. I found my great-grandmother's words of wisdom particularly interesting as I started my CNN Fit Nation triathlon training in January; I knew swimming was going to be a challenge for me.

As a current PhD student in Sociology in Race and Urban Studies at Georgia State University, I have learned that there are many confounding factors why these statistics might be true. Was it that African-Americans lacked access to quality pools and cost-effective swimming lessons in urban and rural settings? Was it that we had common issues around hair-care maintenance and water? Or did generational proverbs from our ancestors keep creeping up to remind us that seawater, and being near the ocean, was not too kind to our people?

While it might not address many of these questions, there has been an increased interest in providing opportunities for African-Americans youth in the inner city to learn how to swim and break the cycle of their fear of water.

As a young person, I was terrified of the sea; seaweed and jellyfish were a major concern of mine that would send me running to the sand. Moreover, being a child of the 1970s, haunting "Jaws" theme music would always play in my mind as I'd tread water in the ocean. I never got over this fear as I entered into adulthood.

Over the last four months, I challenged myself to get accustomed to the water by getting in the pool. But in order to get ready for the triathlon, I had to prepare myself in order to successfully compete. I always hated the smell of pool chlorine, changing clothes and then having to go back to work, but I had to work through it.