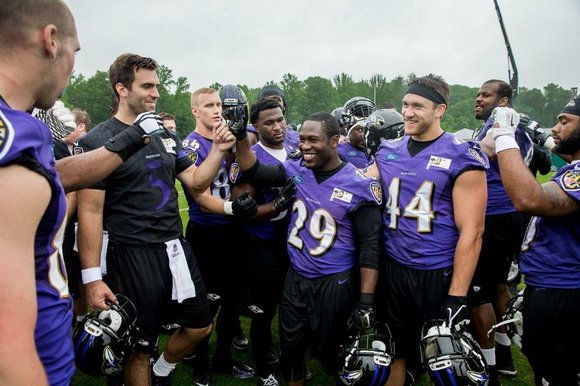 Ravens running back Justin Forsett breaks down the team after practice at the Ravens facility in Owings Mills, Maryland on June 3, 2015. (Courtesy of Baltimore Ravens)

BALTIMORE,Md. — The Baltimore Ravens have only completed a few sessions of Organized Team Activities but running back Justin Forsett has a very good feeling about his upcoming role in this offense. Forsett has been able to catch a good amount of passes in the couple of Ravens OTAs that were open to the media.

Forsett is pleased to be able to utilize the skills that made him an explosive player as a third down back during his days with the Seattle Seahawks. He is more than comfortable with the likelihood of an increased amount of touches via the passing game.

“I was a third down back in the past. That’s how I got my start was being a third down back, picking up blitzes, running screens and routes out of the backfield.” Forsett said with a smile. “I haven’t spent much extra time running routes because outside of last year, I have always been used that way. I am ready for it.”

Forsett said that he has caught a lot of balls in OTAs so far and it is what he expected. “When we first brought him in and he was here, I looked at his track record.” Forsett said. “Matt Forte, he caught 100 balls last year so I think that kind of let me know that I could be getting a lot more passes than I did last year.”

Forsett is excited about being used more. He is working to sharpen his routes in preparation to catch the ball out of the backfield more. He said that they have been doing a lot more things with him as far as spreading him out and running routes. Running backs coach Thomas Hammock has been on the running backs about making sure that they get in and out of their breaks.

Staying close to the team and coming to team activities that aren’t considered to be mandatory is something that comes easily to Forsett. He joked in the past about getting out of “the friend zone” and being able to have a team commit to him long term. This opportunity has an effect on more than just Forsett himself.

Forsett spoke about how it’s good to remain in the area with his family and how it’s been a while since he was able to stay in one city. He said that being able to come back next season with the Ravens was a big part of his staying around during the offseason. Forsett also had a baby this off season so there’s not much room for traveling.

Marc Trestman has brought in a new offense that has a lot of the same West Coast offense principles that Gary Kubiak’s offense had. There are always going to be some new wrinkles and a slight difference in terminology when a new system is implemented. That is another reason that Forsett wanted to stick around. He wanted to get the terminology down and be sure that he and quarterback Joe Flacco are on the same track.

Even though he will finally get his chance to return to a team as a starter, Forsett is still attacking the offseason and every rep with the same enthusiasm that he had when he earned the starting job last year.

“You can’t get too comfortable. My thing is I get comfortable being uncomfortable, making sure that I am not getting complacent.” Forsett said. “I make sure that I am working hard. I know that any given day, I can be out of here. It’s a business and I have to bring my ‘A’ game every day and that’s what I am trying to do.”