Is a new crime wave on the horizon? 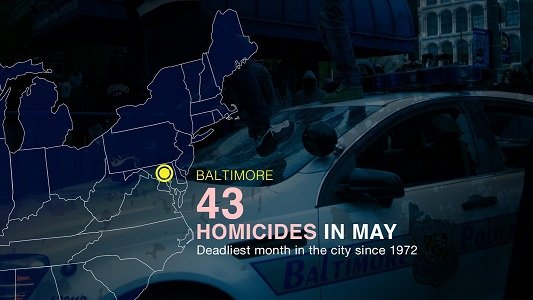 After decades of a downward trend in crime, residents in some large U.S. cities wonder if a reversal is coming.

After decades of a downward trend in crime, residents in some large U.S. cities wonder if a reversal is coming.

If you live in Baltimore, you know that May, with 43 homicides, was the deadliest month since 1972. Or if you are a Houstonian, you've probably heard that murders were up 45% through April compared to the same period in 2014.

The latest statistics in Milwaukee show a 103% spike in murders year-to-date compared with a year ago.

The spike in killings in these major cities would be troubling in itself at any time, but it is especially troubling now, when policing practices, race and social policies are regularly in the news.

The video of a gunman brazenly opening fire on another man in the Bronx in May, or another gunman caught on camera firing across the street at someone in Harlem in April, spread so swiftly online that it is fair to ask if a crime wave is on the horizon.

A review of murder statistics in major U.S. cities so far this year shows an unclear picture.

While Baltimore and Houston appear to be experiencing a crime wave, comparable cities like Dallas and Los Angeles are trending in the opposite direction.

In short, it is too early to draw conclusions of a shift in the trend for violent crime.

How telling is Baltimore's deadly month of May?

Of the 119 homicides recorded in Baltimore this year, more than one-third happened in May.

As the Baltimore Sun put it in an editorial, "We don't think it is at all unreasonable to start asking questions about leadership in a city that, over the last month, was less safe by some measures than it has been at any point in recorded history."

Speaking at an event remembering a toddler who was killed by a stray bullet last year, Baltimore Mayor Stephanie Rawlings-Blake said last month that it is a "very, very painful time in our city."

On the other extreme is Los Angeles. Because of its large population, the city notches one of the nation's highest numbers of murders, but the trend has been shrinking violent crime.

For the cities where crime does appear to be trending upward, how can one know if it is a blip or a historic reversal?

"It's a little bit like the stock market. These statistics go up and down," said Harold Pollack, co-director of the University of Chicago Crime Lab. "It's like asking why did the stock market go up 75 points today."

But numbers have the power to sway, and many of these figures are being used already to bolster arguments for stronger police enforcement or a reformed police presence.