Ravens Timmy Jernigan looking to cash in on big opportunity 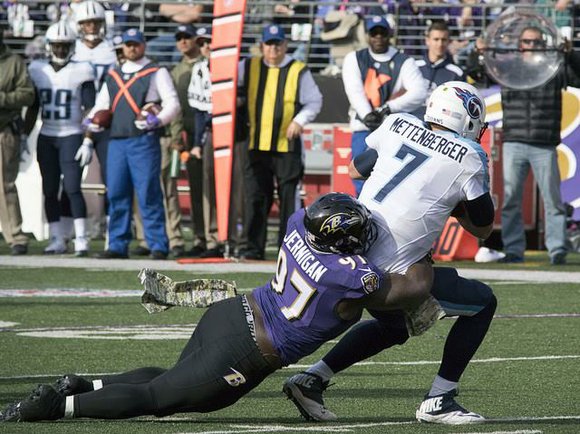 Jernigan played really well when Ngata was out for the final four games of the 2014 regular season. He constantly got pressure on the quarterback and notched two of his four sacks on the season. (Courtesy Baltimore Ravens)

BALTIMORE,Md. — The Baltimore Ravens traded away Haloti Ngata, a franchise stalwart during the off season. That move opened up a spot for second year defensive tackle Timmy Jernigan. Jernigan played really well when Ngata was out for the final four games of the 2014 regular season. He constantly got pressure on the quarterback and notched two of his four sacks on the season.

Jernigan said that he learned a lot last season. He’s a high energy player that likes to be disruptive against both the run and the pass. According to the second year player, he is ready to pick up where he left off last year and feels really good.

“Everything is starting to seem kind of second nature to me. The biggest thing now is just to keep it going and building on top of what I did last year.” Jernigan said. He still has that chip on his shoulder from not being a first round pick in 2014. It won’t allow him to just rely on what he did last year. “You can’t get complacent with what you did and feel comfortable with where you’re at.” Jernigan continued; “I’m just trying to take it to the next level.”

Jernigan was asked what the next level is during a press conference after Ravens OTAs. He replied with zero hesitation, saying that the next level is to make it to the Pro Bowl. Jernigan said that the first order is to win more games. It’s his goal to help the defense get even better even though Ngata is gone.

“I know a lot of eyes are not just going to be on me, but the whole group.” Jernigan said; “We have huge shoes to fill with Haloti [Ngata] missing, and it’s definitely going to be a group effort for all of us, not just me.”

Ngata is a big player but he did more than just clog running lanes. Jernigan said that one of the things that he learned from Ngata was how to practice and work to be perfect with his technique along with his steps and using his hands. Most importantly, Ngata showed Jernigan how to use anticipation and feel to be in the right spot at the right time. Jernigan spoke about how Ngata would know when he could take a chance and go inside on a play.

“The guy knew plays before they even happened, and that’s definitely what I learned from the way that he prepared and got ready for games.” Jernigan said.

The focus on the little things has paid off. Head coach John Harbaugh sees a difference. “He has just improved and gotten better. He’s more confident in what he’s doing defensively. He wants to play to his strengths.” Harbaugh said. “He has a lot of quickness and explosiveness, and he’s focusing on that. I can’t say it’s a dramatic difference, because he’s very confident, but he was really confident last year. He’s a confident guy, so he has really high expectations for himself.”