Fullback Kiero Small pleased to play for his hometown Ravens 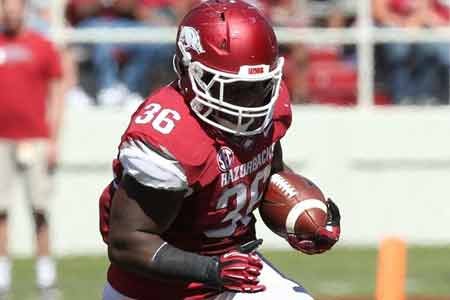 University of Arkansas running back Kiero Small carries the ball during a game from his senior season. (Courtesy Photo/arkansasfight.com)

BALTIMORE — The Baltimore Ravens have started organized team activities (OTA) recently and one of the participants is a local product from former Baltimore high school, Cardinal Gibbons.

Fullback Kiero Small will participate in the Ravens OTAs and training camp this summer. He earned second team All-State honors from the Maryland Coaches Association as a senior. Small is excited to play for his hometown team after being selected by the Seattle Seahawks in the seventh round of the 2014 NFL draft.

Small was released by the Seahawks in August of last year and spent a portion of last season on the Cleveland Browns practice squad along with their active roster. Small made his first NFL start as a Brown when the team faced the Oakland Raiders last year.

That was the start of a three game stretch for Small including a game against the Cincinnati Bengals in which he paved the way for a 170 yard, three touchdown rushing effort by the Brown’s running backs including 94 yards from fellow Baltimore product Terrence West.

The powerful, fullback was signed by the Ravens on November 13, 2014— two days after being waived by the Browns. Small was not on the Ravens active roster last season but he said that he is honored to carry on the Ravens tradition of great fullbacks such as Sam Gash, Lorenzo Neal and Vontae Leach. The physical play from the Ravens is something that made Small enjoy watching the Ravens when he was growing up.

“Being from Baltimore, of course the Ravens were my favorite team growing up. They use a fullback and I liked physical football.” Small said. “My dad always said, you can throw the ball and play a lot of cheap football but in this league you have to run the ball to win.”

Small grew up in Northeast Baltimore, which he says helped talking and getting stuff done on the field come naturally. Like most of the Baltimore area youth, Small was drawn to Ray Lewis.

“Ray Lewis was one of my favorite players.” Small said. “As a little kid, watching the passion that he played with and the way that he led, he represented for the whole franchise. He has a street named after him in Baltimore, the city loved Ray Lewis.”

The leadership and attachment to the community that Ray Lewis exhibited rubbed off on Small. He has already taken part in a few of the Ravens community events including Lardarius Webb’s charity softball game last month.

The road to the NFL was not an easy one for Small. He initially went to Valley Forge Military Academy but only lasted one semester. Small came back home and spent a year working for his father. He feared that his football career was over but was able to get a second chance at Hartnell Junior College in California.

Small once again found success on the football field when he was named a junior college All-American at fullback. He also played linebacker at Hartnell. He was able to parlay his junior college All-American status into a chance to play for the University of Arkansas. Small was known for his punishing blocks and running style. His violent collisions resulted in more than a few broken facemasks for would be tacklers.

One opponent that stood out the most to Small in college was current teammate C.J. Mosley, who played for the University of Alabama, also in the Southeastern Conference. The two had their share of battles and Small cited Mosley as the most complete linebacker that he went against when he was at Arkansas.

Small may not stand out as much right now because the practices aren’t in pads and collisions are not encouraged. Rest assured, once practice goes live; Small will draw his share of on field victories thanks to his fire hydrant like 5-foot-8, 244 pound build.