Indie Soul Movie Review: Jimi: All is by My Side 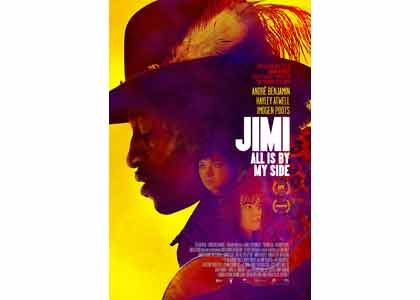 "imi: All is by my Side" is directed by John Ridley. (Photo courtesy of Darko Entertainment)

June is Black Music Month and what better way to celebrate than by watching “Jimi: All is by my Side,” starring Andre Benjamin aka Andre3000 of the Hip-Hop group Outkast. It’s available on Netflix and iTunes or you can buy the DVD.

Andre Benjamin was outstanding as Hendrix in the film that covers 1966-1967; a slice of the musician’s life when he was an unknown backup guitarist playing New York's Cheetah Club to his debut on London's music scene up until his Monterey Pop triumph.

It presents an intimate portrait of the sensitive young Hendrix on the verge of becoming a rock legend. The film shows a glimpse into his personal life with his dad, his problems with women, and how music performers like the Beatles, The Who, Eric Clapton, and Rolling Stones, were a part of Jimi Hendrix journey. “Jimi: All is by my Side,” directed by John Ridley (“Twelve Years a Slave”), does a great job of giving you a visual of the late 60s and touches on race relations in London during that time.

Jimi Hendrix is one of the most fascinating musicians in music history and extremely talented. The black community does not know enough about him because he wasn’t that guy who did strictly black/soul music.

Music fans will enjoy this film that’s based on the events in Jimi Hendrix’s life that formed the foundation of his superstardom.