Life In Baltimore: Baltimore native prepares for triathlon in France 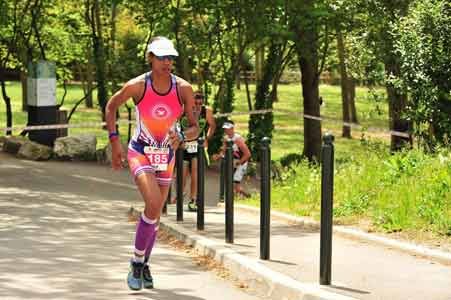 Baltimore native Gyl Johnson is the course director of The Language House, Inc., a TEFL teacher training organization that provides training to become an English teacher abroad. It also helps its clients set up a new life in a foreign country with locations in France, Morocco, Italy and Turkey.

After spending many years as an architect in Ohio, New Mexico and Colorado, Johnson realized that the architecture profession did not provide the fulfillment she craved. She enjoyed traveling and exploring different languages and cultures, which caused her to seek a career change.

After much thought, she decided to leave it all and move to Japan to teach English. That experience changed her entire perspective on life and since then she has lived and taught in countries such as Thailand, Malaysia, Spain and France. She has been an expatriate for nearly 13 years and is currently living in France.

Since age 19, Johnson has participated in athletic activities but she has always defined herself as a runner. As she moved across the United States and then lived in seven different countries, she has regularly modified her sports interests to accommodate her environment. She has done rock climbing, biking, swimming, capoeira, yoga, shoenji kemp, and sea kayaking.

She has participated in 12 marathons.

In 2011, Johnson decided to really embrace the lifestyle of the triathlete and regularly compete in races, mostly in France. The triathlete swims 2.2 miles, then bikes 118 miles and then runs 26.2 miles. Her next awesome quest is the most powerful, the IronMan, which takes place in Nice, France at the end of this month.

When asked to reflect on if she ever had fears about creating a life abroad, Johnson responded, “Everything that I have ever done that has been enriching, rewarding or that I was thankful for, at the beginning I was terrified to start."