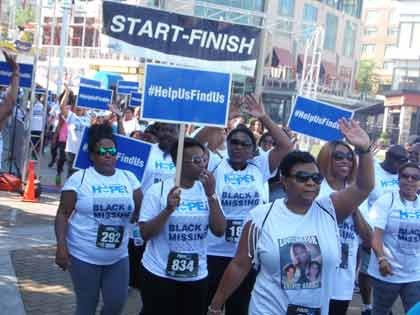 Walkers kick off Black and Missing Foundation, Inc.'s (BAMFI's) third annual Hope Without Boundaries 5K Walk/Run that was held to raise funds for families of the missing and honor missing loved ones. (Photo; Andrea Blackstone)

Jackie Winborne’s daughter, Shaquita Bell has been missing since 1996 when she was last seen with her ex-boyfriend, Michael Dickerson. On May 30, 2015 she stood in front of over 500 runners and walkers assembled at the National Harbor to share her heart-wrenching story at the Black and Missing Foundation, Inc.’s (BAMFI) third annual Hope Without Boundaries 5K Walk/Run.

Two fashionable sisters were happy to support the 2015 Hope Without Boundaries 5K Walk/Run that was held at the National Harbor on May 30, 2015.

The run was held to raise funds for families of the missing and honor missing loved ones. Since 2008, BAMFI has remained committed to bringing awareness to missing persons of color, providing vital resources and tools to missing person’s families, and educating the minority community on personal safety.

Winborne, who said she recently found out about BAMFI’s event, choked back tears as she put a face on the issue of missing people.

“Finally, the year before last, Dickerson gave a plea bargain admitting to the murder. A part of the plea bargain was that he would tell us exactly where she was. We never got that information. Shaquita is still missing as far as we are concerned,” Winborne said.

Natalie Wilson, co-founder of BAMFI and chief operations officer said the word is spreading about the organization. People want to help find our missing. Media partners have also increased.

“We have national and local media partners who are willing to help us find our missing. Since our inception, we have found 130 people, so that’s a milestone for us,” Wilson said. “We cannot wait for the four o’ clock or 5 o’clock news cycle. We need people to follow us (and) get these alerts out instantaneously. Time is of the essence. When someone goes missing, the longer it takes, you’re losing valuable clues, so we need the community to get involved.”

BAMFI offers free guidance and support when families in crisis need help developing a strategy to find their missing loved one.

“I always say if my girls went missing, I really would want Derrica (Wilson) and Natalie on the job to make sure that they are brought home, too,” Allison Seymour, anchor/reporter for Fox 5 News said.

Running the Prince George’s County-based non-profit is a labor of love for Natalie and her sister-in-law, Derrica, the co-founder, president and CEO of BAMFI.

“Missing persons is not a black issue. It’s not a white issue. It’s an American issue. Everybody that is dealing with this tragedy of not knowing where their loved one is, their heart bleeds the same way. For our community to take a stand for making missing persons a priority, and actually seeing it come to fruition out here, is an amazing feeling,” Derrica said.

Vino Vixens, a wine club with members in Baltimore and Prince George’s County meets once a month. Eight members decided to participate in the 5K. They reportedly raised over $1, 600 for BAMFI. Stacey Ross, founder of Vino Vixens, said people they approached were more than happy to donate.

“We wanted to do a 5K walk as a group event,” Ross said. “I feel like the money will be appropriated the way it’s supposed to be. Plus, we all have kids. You never know if it will affect us or another family member.”

Cheers erupted when actor/choreographer Darrin Henson approached a stage before the race began. He said that a friend told him about BAMFI. In response, the actor took time to support the worthy cause.

“I didn’t know about the organization. Now I do, and it’s my mission and my position to let as many people around America know about it,” Henson said.

Another celebrity supported BAMFI’s third annual Hope Without Boundaries 5K Walk/Run. Oscar-nominated actress Elise Neal said that she loves coming to similar events, because she gets to see her people in the best light while doing something positive. She reminded attendees that finding missing individuals is a nationwide issue.

For more information or to find our how you may help, visit: www.bamfi.org.