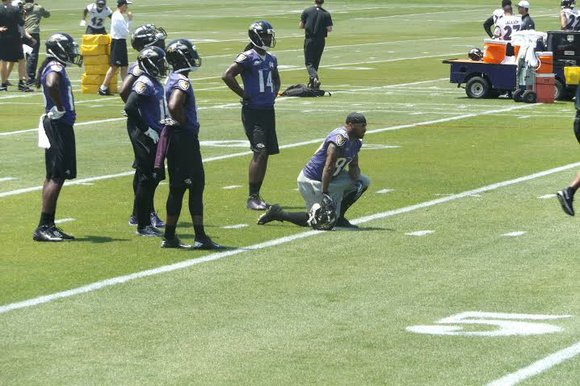 BALTIMORE,Md. — The Baltimore Ravens concluded their 2015 voluntary workouts on Monday. The coaching staff was pleased to see that a large amount of the veterans were in attendance for the OTAs. The team is implementing a similar but new offense under new coordinator Marc Trestman. There are some differences in terminology but a lot of the concepts will remain the same.

Trestman spoke about how pleased he is with the guys that are there. “The guys that are here want to be here, the guys who aren’t here have a reason why they’re not here –nobody is holding it against them – and we are making the most of the guys that are with us.” Trestman continued; “They are having the opportunity to get better and to learn some of the things that we are doing that are new within the framework of last year’s offense.”

The new offensive coordinator is very active on the field and is quick to vocalize his expectations to the players. One of the things that he has particularly taken a likeness to is the calm demeanor that Joe Flacco brings. Trestman referred to it as a “quiet confidence.”

Trestman is making it a point to emphasize what the Ravens offense did well last year and continue to develop the passing game. He mentioned that the rushing offense will also be something that they will continue to work on. He has thrown a lot of offense at the players through football school and OTAs. Trestman isn’t wasting time jumping into the meet of the playbook.

Defensive coordinator Dean Pees also took the stand after practice. Pees is very pleased with the depth that the team has at cornerback. That is understandable after the rash of injuries that the Ravens suffered at the corner position last year. Quantity always creates competition and that is something that Pees is happy about.

“It’s just a tremendous amount of competition there at corner, and they all want a spot. They all want a shot. They’re all hungry for it, and I think it’s just making everybody better.” Pees said. “I think the addition of Kyle[Arrington], the addition of Kendrick [Lewis], Tray [Walker] … But the guys that have been here, too, I really think they’re stepping up a little bit, too, because I think they feel like they have to, to compete. I really am pleased so far with the way camp is going.”

Two of the Ravens defensive players, safety Matt Elam and linebacker Arthur Brown need to have a big camp this year. Pees singled the two out as having outstanding camps so far. He said that Brown is getting around well and it is the result of his having a firm grasp of the defense after being in it for his third year. According to Pees, Brown has shown tremendous improvement.

Pees said that Elam is having his best camp as a pro “bar none.” The defensive coordinator said that he is expecting big things out of Elam this year. He pointed out how Elam has improved communication wise. Elam is frequently in the right spot and is taking better angles to the ball.