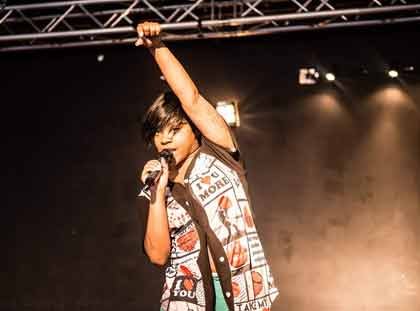 BALTIMORE — June is Black Music Month and a prime opportunity to recognize local talent like The Baltimore Allstarz. The newly created group was assembled the day after the Baltimore riots occurred following the death of Freddie Gray.

The group is reportedly comprised of some of the best musical talent in the area. Approximately 16 singers and rappers ranging from in age from 20 to 34 participated in recording a positive song about Baltimore called “Stand.” Artists united to share a message about standing despite adversity. The official video for the single was released on Vevo on Monday, June 1, 2015 by a Baltimore-based record label called Low Key Music Group. The video was shot in Druid Hill Park.

Williams is a Maryland resident who is employed as a computer engineer by day. The relatively new CEO of Low Key Music Group began pursuing his musical interests as a DJ at 16 years old. Williams has worked in Artists and Repertoire (A&R). Along with Dinero Jones, chief operating officer (COO) of Low Key Music Group and Jonathan Hawthorne, vice president, Ivory and Williams aspire to show that Baltimore can have a record label that is just as professional as other places like New York, Los Angeles, Chicago and Atlanta. While working toward that goal of improving Baltimore’s ability to place talent in the spotlight, Ivory and his team were inspired to work toward changing the perception of the city after the riots.

“That night he [Ivory] started writing the song. My producer came up with a track. Because we have relationships with all of these individuals in Baltimore, it was an open invitation to come out to hear the song, and [to decide] if they wanted to be a part of it. The ones who called are the ones who came. It was a nice turn out,” Williams said. “So we just want to show the youth that you’re able to be whoever you want to be, and don’t be defined by what the news is showing, because all of Baltimore doesn’t look like that or what ‘The Wire’ shows. I just want to show people around the country that blacks are just as educated, just as smart.”

Ivory explained that he wants to be able to unite artists and promote collaboration, even beyond the initial group of Baltimore Allstarz who contributed to “Stand.” He believes that artists should not have to leave Baltimore for their talent to be recognized.

“What I wanted to do was build a platform and an outlet for all of the artists in our city to start doing things together, although we want to service every talented artist in the United States,” Ivory said.

On Facebook, “Stand” is described as an uplifting inspirational song that is the “We Are The World” of this generation. The general concept of what started in response to the riots, is gaining momentum. A Christmas record is already in the works. Additionally, The Baltimore Allstarz have been performing the song live at various venues, including: Frederick Douglass High School for a summer jam, the UniverSoul Circus and the Downtown Cultural Arts Center in Baltimore. The group will participate in entertainment executive Frank Johnson’s Block Party Tour in conjunction with Mayor Stephanie Rawlings-Blake. Participation in a forthcoming national anti-bullying tour is also in development.

London Savoy, 23, is a Baltimore native who was once signed under Mary J. Blige’s label, Matriarch Entertainment, along with members of “Just Us” a few years ago. Now a part of the Baltimore Allstarz, Savoy can be spotted showcasing her impressive lyrical skills onstage, along with fellow talented artists. While pondering the idea of artistic unity, Savoy says she was glad that she got involved in the project.

“I feel like it shouldn’t be a tragedy for everyone to come together,” Savoy said. “I’m all for positive energy.”

To watch the video for “Stand,” visit http://youtu.be/TgOVmBn0jgc. The song is available for purchase on iTunes.