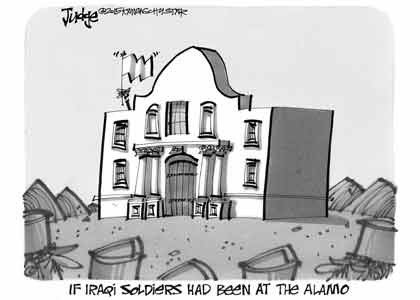 Re: The Phantom Iraqi Army

The Iraqi Army has a history of moving to the rear and exposing their backsides to attacking forces.

The Iraqi Army melted like butter when we attacked them in 2003. They faded away when ISIL attacked them, and then lost Mosul and most of northwestern Iraq along with large quantities of U.S. equipment. Recently they turned tail and abandoned U.S. military equipment when they ran from Ramadi.

The Iraqi Army cannot be relied upon to fight ISIL or any other insurgent groups, and we should not supply them with weapons we could possibly face in the future.

Our attack aircraft are currently destroying former U.S. military vehicles captured by ISIL from the Iraqi Army, and this will continue into the future.

The latest news is the Administration is sending 2,000 anti-tank rockets to combat ISIL vehicles. We should not supply these rockets to the Iraqi Army, because they will probably fall into the hands of ISIL and other terrorist organizations, and if we ever have to go back into Iraq, our military could encounter these weapons.

We should reduce sending military equipment to the Iraqi Army and increase arms shipments to the Kurds and Druze.