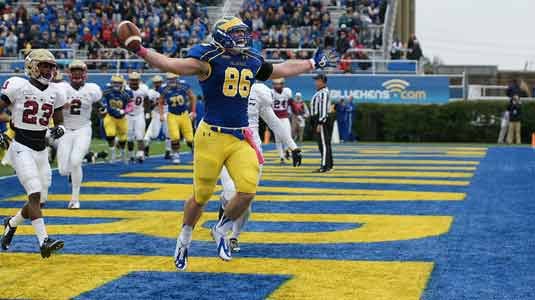 Coming into the NFL from a small school can be a bit of an adjustment for a rookie. The Baltimore Ravens selected tight end Nick Boyle from the University of Delaware to bolster their tight end group.

At 6’4” and 270 pounds, Boyle was known more for his big body and how he can be a force in the blocking game. The big tight end has shown that he is more than just a big blocker at organized team activities (OTA) and is looking to continue progressing into mandatory mini-camp next week.

Boyle was a three-year starter at Delaware. He was one of five players to see significant time as a freshman. Boyle was an All-American and first team All-Colonial Athletic Association selection as a senior after he posted 37 receptions for 304 yards and four touchdowns. His 101 receptions, 984 yards and 12 touchdowns made him one of the best tight ends to ever play for Delaware. Boyle was the first Delaware tight end to earn All-American honors since Ben Patrick who was selected by the Arizona Cardinals in the seventh round of the 2007 NFL Draft.

Athleticism runs in the family for Boyle. Nick Boyle is the youngest of four children. Two of his older sisters were also college athletes. His sister, Lauren was a four-year starter in basketball at Muhlenberg College in Pennsylvania. One of his other sisters, Kate played soccer for two seasons at Susquehanna University, also in Pennsylvania.

The Ravens brass felt that Boyle would successfully make the transition to the NFL after seeing how well he performed at the Reese’s Senior Bowl in Alabama. Assistant General Manager Eric DeCosta was at the Senior Bowl and was quick to point out the good things that he saw in Boyle.

“He stood out. You get these small school guys and you want to see how they do on a big scale. So, he went down to Mobile, competed very well, had a great week of practice, looked athletic, blocked extremely well.” DeCosta said. “He is built strong. He is a NFL body tight end— he’s a point-of-attack tight end.”

The adjustment has been a solid one for Boyle so far. He spoke specifically about what was difficult about making the transition and how he has attacked it.

“From rookie camp to OTAs, it has been the speed of the game. You have the veterans on the field now. The playbook, the play calls are a lot longer than they were at Delaware. You have to listen to your keys. The more you hear it and practice it, the easier it is to pick up.” Boyle said.

Getting the plays down and adjusting to the lengthy play calls was difficult because Boyle had to go back to Delaware to finish up classes.

“Our school didn’t get out until a couple of weeks ago so I was away and missed the football schools here. I still had install calls with the coaches but not being here kind of threw me for a loop,” Boyle said.

The young tight end has done an excellent job catching the ball and making plays in OTAs. Marc Trestman’s offense is a very tight end friendly offense that will use plenty of double tight end formations. There will also be times when the Ravens have three tight ends on the field. Trestman spoke about a commitment to running the football as well, which is a good match for his blocking prowess. Landing in Baltimore was an excellent opportunity for Boyle.

OTAs are in the books and Boyle has made a very positive impression on the coaching staff. Next, Boyle will look to build on his positive momentum next week at the mandatory mini-camp.