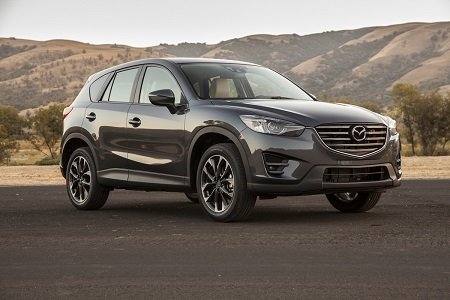 DETROIT (NNPA) — Mazda gets little respect – and the Japanese automaker should get more.

When the CX-5 crossover first came on the market, it was warmly accepted. It was spacious, functional and smartly styled. And over the years it has gotten even better but automakers with much larger advertising and marketing budgets have gotten all the attention for their compact utility vehicles while the CX-5 is arguably better.

It was powered by Mazda’s 2.5-liter four-cylinder engine that made 184 horsepower and 185 pound-feet of torque at 3,250 rpms. Mated to a six-speed automatic transmission, the 2015 CX-5 had an EPA fuel rating of the 24 mpg in the city, 30 mpg on the highway and 26 mpg combine. We averaged 24.9 mpg during our week-long test drive.

This engine was capable but caused us a few quibbles. On cold starts, it was rather raspy much like a diesel engine. And at speed, it was a bit sluggish when asked to aggressively accelerate. More torque at a lower rpm could solve the sluggishness without giving up much on fuel on economy. Still, the engine was capable and we never found ourselves in peril because of a lack of power.

Our all-wheel-drive test vehicle responded to driver input smartly. It handled well, turned in promptly, cornered without wobble, handled the warped pavement here, and it did pretty well traversing the sizable puddles and downpours in the year of the big rain.

Mazda’s 2015 CX-5 had the automaker’s heavily lauded SkyActiv technology, which is a system of improvements involving the engine, transmission as well as the chassis.

For instance the engine has the highest combustion ratio of any gasoline engine that improves fuel efficiency by 15 percent and low and mid-range torque. The transmission technology substantially reduces slip. While the SkyActiv chassis technology involved reducing weight by 100 kilograms (220 pounds) across Mazda’s product line. It all adds up to a CX-5 that was rigid and quiet with a really solid ride.

The seats were comfortable and stylish, the 2015 Mazda CX-5 could tote five people but four could ride in real comfort. There was plenty of storage behind the second row. We thought the touch screen was a little bland but we were at a loss to say how its looks could be improved. Still, the 2015 Mazda CX-5 held a bunch of surprises.

Of course it had a navigation system, satellite radio, a moonroof and a Pandora setting on the audio system that itself was premium. But there were some surprising creature comforts. Adjustable headlights, blind-side alert, heated sideview mirrors, a rearview camera, and push button start, stop as well push button lock and unlock and well as voice controls.

It was just a few years ago that this sort of equipment was found in vehicles that cost a lot more than the 2015 CX-5’s $29,220 base price. Add on options and freight cost and the total for our test vehicle was $31,760. That amounted to not that much for a well-equipped and comfortable utility vehicle.