Caribbean Heritage Month: A worthy tribute to people who made their presence felt 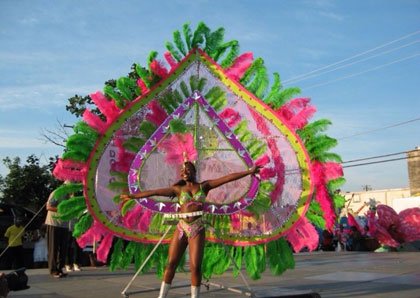 A Caribbean Carnival dancer who will be part of the Carnival Parade during the Flag Day celebrations at the Reginald F. Lewis Museum on Saturday, June 7, 2014. (Courtesy Photo)

(NNPA) — Special to the NNPA from the New York Amsterdam News

Caribbean Heritage Month began with a pledge to help young entrepreneurs in the Caribbean break into the business mainstream; a commitment to boost clean energy across the Caribbean; and an acceleration of the pace of harmonizing Washington-Havana diplomatic and economic relations.

Just as important is continuing the fight with the Republican controlled Congress in Washington to reform America’s immigration laws so that the eligible youthful immigrants among the 11 million undocumented foreign-born can realize the American dream.

Those goals were underlined by President Barack Obama in his annual proclamation that commends Caribbean Heritage Month in June to Americans while saluting the contributions of millions of people from the island-nations and coastal states who in his words “have enriched out nation and strengthened the deep bonds between our peoples.”

Caribbean Heritage Month, whose history can be traced to a strong desire, articulated by members of the U.S. House of Representative a decade ago at the annual Caribbean Multi-National Business Conference sponsored by the New York Carib News is now a fixture on the U.S. annual calendar. It is observed around the country, especially in cities with large Caribbean immigrant populations. Poetry, music, dance, panel discussions that assess the economic and social challenges and opportunities confronting Caribbean nations and the region’s Diaspora in the U.S. fill the programs arranged by colleges and universities, drama, churches, community institutions, libraries, schools, neighborhood organizations, municipal bodies and cultural groups.

In New York, the City’s Comptroller, Scott Stringer, the Caribbean American Chamber of Commerce and Industry, Macy’s, Carib News, and the Neighborhood Technical Assistance Clinic are among the various institutions and organizations staging special events that draw attention to the contributions of Caribbean-Americans to the country’s prosperity.

In his proclamation, President Obama reiterated his administration’s intention to “lifting up hardworking individuals throughout the Caribbean and partnering with governments to build the foundation for the next century of progress and prosperity.”

On the White House’s list of goals for the Caribbean and its Diaspora were:

In a statement, U.S. Representative Yvette Clarke, whose Ninth Congressional District of Brooklyn is the home for tens of thousands of Caribbean immigrants, said that she would “continue to work in support” of the president’s initiatives and “the continued achievement of Caribbean Americans in the United States.”

The federal lawmaker said that there were nearly three million Americans of Caribbean descent in the country and they have “contributed to every part of our society.”

Karl Rodney, Carib News publisher, said that the month-long celebrations “were a fitting tribute to the millions of people from the Caribbean region who “have helped in diverse ways to make the U.S. a prosperous country. We are grateful to the lawmakers who led the campaign for the Month’s introduction.”