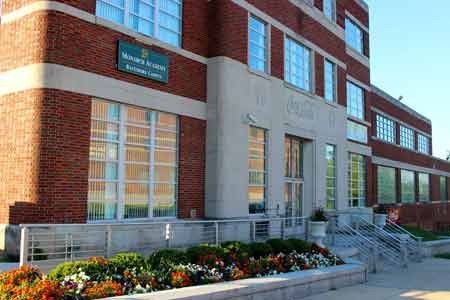 BALTIMORE — Monarch Academy Public Charter School celebrated a milestone in grand style on May 27, 2015. Guests were entertained by a video of students performing “The Wizard of Oz,” while others from various classes at the academy performed live music with string and brass instruments.

Officials also celebrated the school’s partnership with the Coldstream-Homestead Montebello community by hosting dignitaries and others during a special community event on May 27, 2015.

“It is hard to believe that just a few short years ago this building was only known as the old Coca-Cola Building and today, with the vision of The Children’s Guild and Jonathan Melnick, who owned the building, it stands as a vibrant center of learning in our community and has 1,000 students from throughout Baltimore City pass through its doors every day,” said Andrew Ross, president and CEO of the Children’s Guild, the parent organization of Monarch Academy.

It included Nancy Scheinman, who along with her artistic team designed the murals and graphics that guests viewed throughout the school.

“Nancy has been an important partner to all of The Children’s Guild’s new and renovated facilities for many years and has helped us to create our unique, creative learning environments,” Dr. Ross said, before helping to unveil a photo of Senator Dalton with Monarch Academy leaders that will hang in the school lobby.

The popularity of Monarch Academy has not been lost on the students who attend and succeed and their parents.

After her children started attending Monarch Academy, Laura Dorsey-Elson says she knew what she was going to do next: Lobby for a charter high school. Dorsey-Elson’s children, now in third and sixth grades at Monarch, started there last year after she heard good reviews from other parents in the area.

“The beautiful part of charter schools is that they have a lot of control creating exactly the kind of class culture and school culture,” Dorsey-Elson in a previously published interview.

She said the children love it and she is pleased with how they are being educated. Now she’s worried that come ninth grade, this sort of education will end.

“Students get into a larger environment— and you’re going to get an even more diverse set of values and behavior choices, and suddenly that child may feel lost,” she said.

As the school semester closed and graduates prepared to move on, officials reminded the community of Monarch Academy’s continued commitment to providing opportunities for a solid education.

“We wanted to share with all of you, and especially the members of the CHM community, the exciting learning environments we have created as we believe that the surroundings in which children learn are important and part of our Transformation Education culture,” Dr. Ross said.

“We are also here to celebrate our partnership with the CHM community and we would not be here if it were not for their support and encouragement, ” he said. “Together, we want to make the Coldstream-Homestead-Montebello community the best that it can be, and Monarch Academy has made the commitment to give back to the community and to teach our children the importance of being part of something bigger than themselves.”