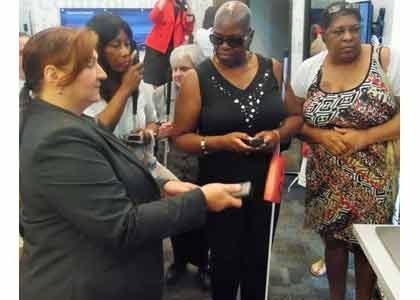 Patricia Furman, Regional Product Manager at Comcast (left) demonstrates the voice-controlled TV remote at Comcast’s Innovation Lab in White Marsh on Monday, June 22, 2015. Furman explained features of the device, along with The X1 Talking Guide to a technology user group from the Maryland State Library for the Blind and Physically Handicapped. (Photo: Andrea Blackstone)

BALTIMORE — According to the U.S. Census data, an estimated 8.1 million people have a visual disability. Comcast has taken a technological leap to offer a more inclusive entertainment experience for those who are vision-impaired by addressing the usability of the company’s products. On June 15, 2015, over 40 members of a technology user group visited Comcast’s Innovation Lab in White Marsh. The user group, which meets monthly at the Maryland State Library for the Blind and Physically Handicapped in Baltimore, often explores adaptive technologies through technological demonstrations.

While visiting Comcast’s Innovation Lab, group members learned how to use Comcast’s X1 Talking Guide, which is a voice-enabled television user interface that launched in 2014. Additionally, a new voice-activated remote that works with the X1 Entertainment Operating System was demonstrated. It was unveiled in May 2015.

“It [the remote] allows those with disabilities freedom to access content. It’s a much easier way to find shows that they’re interested in,” said Chad McCauley, director of product management at Comcast.

McCauley explained that about three years ago, Comcast hired Tom Wlodkowski as vice president of audience. Wlodkowski’s team is involved in design and development of future enhancements, remotes and devices. They work in the Comcast Accessibility Lab to develop accessible products, features and showcase assistive technologies. Focus groups and usability testing is conducted with key communities of people with disabilities. This activity helps Comcast to educate their employees about accessibility, while allowing customers to learn more about how they can access services.

Wlodkowski’s team also began to realize that they could help an underserved segment of the community by adding enhanced features to their existing platform, such as the voice-activated remote. The remote is equipped with a microphone button. Users hold the button down and speak to enable the system to turn to a channel. It reportedly recognizes thousands of common commands. Viewers can also do things like navigate Xfinity On Demand, search for networks, shows and movies and set DVR recordings.

“We want viewers to get to the shows and movies they love quickly, and we’ve built a remote control that’s smart, fast and intuitive. You don’t have to learn a new language or speak like a robot. Just press the blue button, say what you want to watch and it appears on screen,” said Sree Kotay, Comcast Cable’s chief software architect in an article on their corporate website.

Jerry Price is the coordinator of a technology user group and an Adaptive Technology Education Program coordinator at the Maryland State Library for the Blind and Physically Handicapped. Price remarked that he is constantly looking for new technology to introduce to his group. He discovered Comcast’s X1 Talking Guide video on YouTube. Afterwards, Price tweeted to Comcast to explain that the technology user group wanted to attend a production demonstration in Baltimore. The company embraced the idea of opening the doors of their lab, which is typically used by employees to experience new technology.

After an introduction to the products in White Marsh, a live Q & A allowed members who are blind or visually impaired to navigate the X1 platform. They experienced how the X1 Talking Guide features a female voice that reads program titles, network names, time slots and DVR and On Demand settings aloud. Attendees also tried out the new Xfinity remote with voice control. It complements the talking guide. Comcast customers can reportedly navigate tens of thousands of shows and movies on the X1 Entertainment Operating System with their voice by using the remote.

“I think it’s incredibly helpful being able to use the DVR, which is something that the visually impaired community has never been able to do. In all of these years, they’ve never had a talking DVR, and the DVR has been around for a while, so there has been a long gap from using the VCR,” Price said. “Also, being able to find the channels quickly, and being able to navigate to the types of shows and movies that you’re looking for is really a big help.”

Existing customers who have the X1 Entertainment Operating System with DVR service can order a free voice-controlled remote online, or they can pick one up in a local Comcast store.