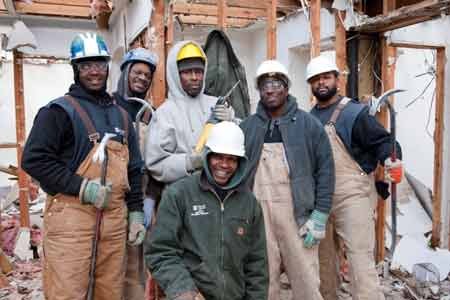 Second Chance workers. Second Chance specializes in salvaging windows, appliances and above all, the lives of individuals who have faced barriers from incarceration to not having enough of an education to land employment with family-sustaining wages. The company also provides life skills training workshops for the employees. (Courtesy Photo/Second Chance Inc.)

BALTIMORE — It was 12 years ago when Mark Foster started Second Chance Inc. with about four individuals.

Today, the founder, president and CEO of the nonprofit couldn’t be more proud as about 150 individuals are working to take apart buildings that would otherwise be demolished and dumped in a landfill.

Second Chance Inc. specializes in salvaging windows, appliances and above all, the lives of individuals who have faced employment barriers from incarceration.

Clarence White, one of the men hired and trained to do this delicate work, learned how to safely and skillfully remove lumber and stone, and take apart kitchens and bathrooms.

White told Voice of America News that working with Second Chance has been a life-changing experience.

“Beforehand I was selling drugs, doing all the wrong things,” he said. “I went to prison, I came home and was looking for a job and a lot of jobs weren’t hiring me. Second Chance provided that opportunity. They believed in me and I went from not feeling confident, feeling like I can’t get a job, I cannot do this, I cannot do that, feeling limited, to feeling limitless.”

White has opened a bank account and moved into his own place. But more importantly he said, “I’m able to provide for my daughter and give her a better life.”

Foster’s organization hasn’t gone unnoticed. Maryland Democratic U.S. Sen. Ben Cardin recently joined the leaders, partners and staff of Second Chance, Inc. to discuss how unique ventures in social enterprise like those underway at the nonprofit organization housed inside a sprawling former factory could help answer some of the myriad challenges faced in today’s inner cities.

In a roundtable conversation earlier this month that centered on the organization’s efforts to hire and train people from difficult backgrounds in the fields of deconstruction, architectural salvage, retail, operations and customer service, Cardin heard first-hand accounts from four employees with criminal backgrounds who had turned around their lives following the opportunities afforded them by Second Chance.

“It never ceases to amaze me what people can do when they are given even the smallest glimmer of hope, and I saw that transformative power on display at Second Chance,” he said. “If you want to see people from some incredibly challenging backgrounds turning their lives around, visit them in South Baltimore. Second Chance isn’t only equipping people with the skills needed for ‘green-collar’ jobs; it’s helping communities renew themselves.”

Foster said the recognition from the senator is appreciated.

“Our focus from [the] beginning as to who the organization would ultimately serve was the hardest impacted members of the community, those most difficult to employ,” he said. “There’s unemployment, there’s structural challenges for people living in certain neighborhoods to access work and know how to access work.”

Between 60 and 65 percent of individuals are returning citizens, Foster said.

“They’re getting some skills in a program that lasts 12 to 18 months and in that period of time they’re able to get a lot of skills and learn to conduct themselves in terms of job applications in the future,” he said. “For us, we’re helping people to get on the ramp to employment and helping them to remain employed.”

Once employed, workers usually land wages well above the minimum at companies such as BG&E and the Amazon warehouse.

“The one thing we think is that people are motivated by hope that there could be a better future,” Foster said. “The people are really the thing that should drive us the most, giving those people opportunities that they otherwise wouldn’t have.”