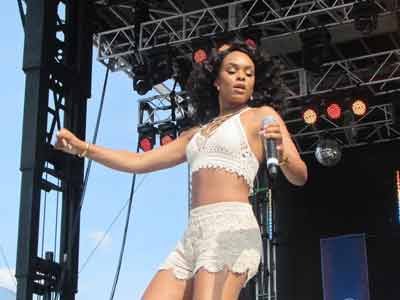 Singer/Actress, Demetria McKinney performed her song: “Trade It All” at the 2015 African-American Festival on June 20 and 21, 2015 in Baltimore City.” (Photo: Phinesse Demps)

If you are like many folks who were at the African-American Festival this past weekend, who were checking the program guide to see who was performing or checking the app on their phone, courtesy of Black Enterprise, you were saying one of two things: 1) Who is Demetria McKinney? or 2) I didn’t know she could sing!

Demetria McKinney was part of the cast on Tyler Perry’s House of Payne. She can be seen on the Bravo Channel’s Real Housewives’ of Atlanta and also has a reoccurring role in Divas Maids, which appears on the Lifetime Channel. And yes! She sings!

“Acting and singing have always been a passion of mine. Just so happens that the acting took off. But I have always wanted to sing,” said McKinney.

She has tested the waters with a few singles over the past few years, “Work With Me,” “100 featuring Da-Brat,” “Still Believe in Love” with Musiq Soulchild, and now her latest “Trade It All.”

“I’m happy that I will be releasing my full CD with E-One Entertainment and that will be released soon. Right now I’m promoting the single, “Trade It All,” which I’m so excited that the fans love!”

She took to the stage on Sunday during the festival and showed the crowd not only is she beautiful but she can dance and sing. Demetria is the complete package, not because she is gorgeous, she is more than that. She is determined, talented, and driven. Demetria McKinney is setting the bar for other young women to follow. “For those women who want to be in this business; Know who you are and what you represent before they, decide for you.”

Demetria McKinney is fully focused on her goal to be the best and we appreciate her for that. You heard it here first, she’s going to be big! For more on Demetria McKinney: www.demetriamckinney.com