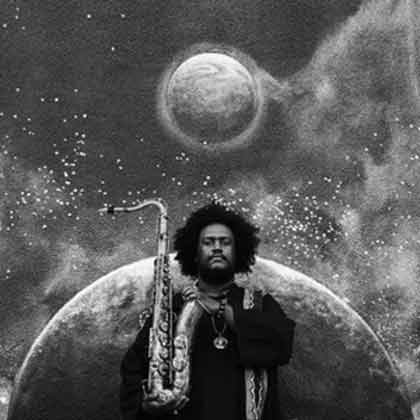 In honor of Black Music Month, this week’s spotlight artist is Kamasi Washington who hails from Los Angeles, California. He is a jazz saxophonist (tenor) and is an accomplished musician who’s worked with some of the best in the business.

Washington just released his debut CD, “The Epic” and I can honestly say that I have not heard anything like this in a long time. For all the Coltrane and Davis fans out there, if you were worried that their sound was lost or if the younger generation would even be able to appreciate quality jazz— don’t worry Washington is keeping that sound alive!

Washington has put together a delicious sound on this project from start to finish. Nearly three-hours of pure bliss— every instrument played shines on the 17 tracks.

I discovered Kamasi after I heard the track entitled, “The Rhythm Changes,” which features vocals by Patrice Quinn. Then I just had to get his music. A very polished musician, Kamasi gives you a dose of a young sound as well. “The Epic” has that funk and soul, blended with a pure jazz flow. Washington is like a deejay blending records and mixing sounds. Every track gives your ears a delightful sound. My favorites are: “Miss Understanding,” “Isabelle,” and “Malcolm’s Theme.”

Do yourself a favor and get this CD with great music from Kamasi Washington available at: www.brainfeedersite.com.