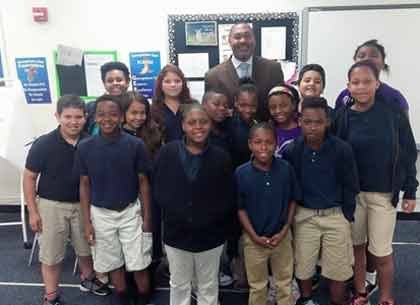 Larry White Sr. spoke to fifth graders about entrepreneurship on career day at Georgetown East Elementary School in Annapolis, Md. Students were also given a ride in a limousine, compliments of VIPeVENTS Concierge LLC, along with the teacher and principal in 2014. (courtesy photo)

Larry White Sr., the CEO and founder of VIPeVENTS Concierge LLC was nominated as Best Community Leader for Steve Harvey's Neighborhood Awards. This year, White was among over 50 entrepreneurs and nonprofits giving back to the community throughout the country competing for $30,000 to be used for community outreach and programs. Although the Glen Burnie resident did not advance to the second round of the contest on May 27, 2015, White is still a winner in the eyes of many.

Through his work running an event planning and event marketing company equipped with transportation vehicles, he crosses paths with individuals like Dr. Natalie Forest, Ph.D. the CEO of Natalie Forest International. The owner of the Baltimore-based business nominated White for Best Community Leader.

“I decided to nominate Larry White, because after having gotten to know him last June, I have seen his heart and soul truly beat for the community. Even the networking events, which appear to be business, are all about business then giving back to the community. Everything that he does has some kind of community aspect or goal to it. Therefore, because he doesn’t think about himself in this, he is just a prime example to me of somebody who brings the community together,” Forest said.

White spearheads many community endeavors, such as The Black History Program, which has been running for four years. It is offered to students who attend Meade Senior High School, Frank Hebron-Harman Elementary School and Freetown Elementary School. Participants are recommended by guidance counselors. Workshops and seminars are organized by White. He finds volunteers to assist in his signature program, which teaches students financial literary, health and wellness and African American history.

“It is really designed to assist Title I schools to have community service (and) also education on African-American history, because a lot of our youth today just don’t know what our history is. I think that’s significant when they go out to college, because if you know where you came from, you have an idea of how to be competitive. “

Every November, one week prior to Thanksgiving, the entrepreneur partners with Chick-Fil-A in Pasadena to distribute approximately 5,000 hot box lunches to families through churches located in Maryland. White also organizes an annual Christmas holiday toy drive that has been held for three years. He has worked with Big Brothers Big Sisters in Baltimore to distribute items for children, in addition to Sarah’s House, located in Fort Meade, Maryland. Sarah’s House is a shelter battered women, which offers transitional housing for homeless families. Even outside of holiday periods, White works with the shelter to offer assistance such as donating prepared meals.

Every August before school begins, White leads a backpack drive to provide backpacks to youth who receive free and reduced lunch at four to five schools in Anne Arundel County, including Georgetown East in Annapolis. He also donates them to students located in Prince George’s County, Baltimore City and Baltimore County.

“My wife and my five children, we all team up to lead by example,” White said, noting his family’s commitment to community service.

In 2014, White was awarded the Dream Keepers Award at the annual Dr. Martin Luther King Jr. Awards Dinner held in Anne Arundel County, primarily because of his successful Black History Program. White is reportedly the first person to receive the honor without being a senator or congressman.

The Navy veteran who served for 12 years coordinated events when he served in the military. He believes that volunteering to help the community is “everybody’s job.”

White explained that he felt humbled and proud to represent Maryland and his hometown of Gary, Ind. as a nominee for the Steve Harvey Neighborhood Awards. Giving back has been in his blood since he was a young person.

“I do none of it for me. I do it all for the adults and the children,” White said.