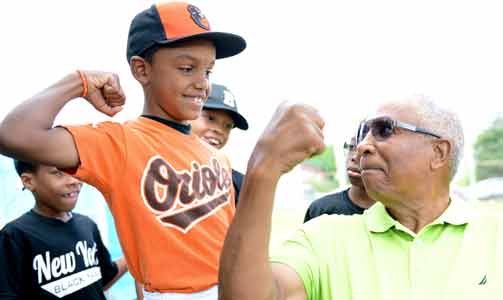 During the event, MLBPA presented a donation of new baseball equipment to James Mosher Baseball representatives. MLBPA is the union that represents all active and former Major Leaguers. Big Leaguers served as honorary coaches during games, distributed autograph cards, and participated in a question and answer session with the youth players.

Former big league outfielder Jeffrey Hammonds was among the participants. Highlighting the Freddie Gray police brutality case, he noted the importance of the event.

“We have come to an area that has been highlighted for the wrong reasons,” said Hammonds, who was recently hired by the Major League Baseball Players Association as Special Assistant for Player Program Development. “We went there to work with the community - that is the story. The volunteers over there have been doing this for 53 years. That speaks volumes to their commitment to the community and the youth of that community. It makes sense we have an alliance and recognize those efforts.”

“We have a duty as professional baseball players, and as gentlemen who have lived their dream,” said Hammonds. “Children in this community have been affected by the unrest. Having this event for the James Mosher Baseball League only made sense. We may not be political figures, but we can create a positive impact with our presence. By coming to Baltimore, we are showing that we are paying attention to what is happening, and that we care.”

Hammonds also highlighted the efforts of Kenneth Abrams. The owner of Abrams Insurance, Abrams was a key organizer for the event.

“We had a short runway of time to do this,” said Hammonds. “We only had about a month. It was a lot of due diligence and many people worked hard. One of them was Kenneth Abrams. A lot of the credit for this event goes to him.”

He added, “Everyone’s mind and passion is in the same place. We wanted to recognize the legacy of the James Mosher Baseball League, and leave a smile on the kids’ faces.”

Abrams is familiar face in the sports arena. He formerly worked for The Baltimore Ravens and works quietly behind the scenes on many sporting and special events.

“These players know and understand that their playing can be used to make a positive impact in the community,” said Abrams. “We went in to bring some sunshine to that area. These players wanted to see, hear and want to be a part of the solution.”