Coppin State's Christina Epps, a 2014 graduate, is a national champion. 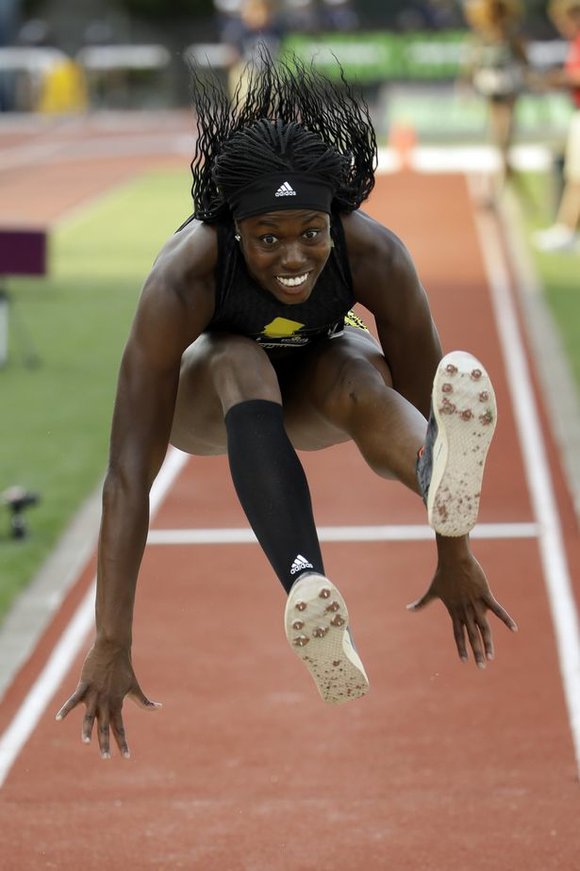 BALTIMORE,Md. — A confident and consistent Epps treated the overflow crowd to an enthralling performance by soaring a career best 14.09 meters (46 feet, 2.75 inches) to win the triple jump at the USATF Outdoor Track & Field Championships at the University of Oregon’s Hayward Field Friday night.

“It actually hasn’t sunk in yet,” Epps said. “It feels so unreal. I was going through my victory lap yesterday like I can’t believe this is happening right now. I am extremely humbled and honored.”

Epps is the best triple jumper in the United States of America. How amazing is that?

Epps, who competes for the adidas Garden State Track Club, hit her 46-2 3/4 mark on her first attempt and it stood up as the best performance of the competition. April Sinkler was second in the TJ with a 45-4 1/2.

“I feel like I am peaking at the perfect time of the season,” Epps said. “I felt great today. I think I held my hop and step extremely well today and that’s what led to my personal best for the year. I also moved off of the board well going into my jumps.”

With her victory, Epps moved one step closer to earning a sacred spot on the 2015 IAAF World Championships team set for August 22-30 in Beijing, China. She needs to clear 14.20 meters in order to officially earn a trip to China. Fortunately for Epps, her performance on Friday earned her another opportunity to reach that destination.

Epps will compete in the 2015 Pan-American games in Toronto next month. The triple jump will be held on Tuesday, July 21 at 6:00 p.m. according to the schedule. For Epps, this was the ultimate triumph in an amazing and excellent career.

“I am blessed to have another opportunity to hit the mark I need for world championships,” Epps said. “This will be my first international competition, so I am excited about that.”

Earlier this year, Epps won the triple jump at the Penn Relays and the Morgan State Legacy Meet. She jumped her previous career best of 13.83 meters at the Legacy Meet. Epps credited the energy and enthusiasm of the large crowd for providing the necessary fuel for her best performance of her life.

“The crowd here gives so much support and love to everyone,” Epps said. “Every event here is amazing. The atmosphere is something you can’t beat. When you walk into the stadium, it feels like you’re at the Super Bowl. The weather was hot and it worked out great for a lot of competitors because there were tons of PRs today.”

Epps was named the Mid-Eastern Athletic Conference (MEAC) Woman of the Year and one of the 30 finalists for the 2014 NCAA Woman of the Year Award. During her star-studded career, Epps was an 12-time All-MEAC student-athlete in track and field and a six-time triple jump champion in the conference. She is the current Coppin State triple jump record holder. Her school standard is 13.40 meters (43 feet, 11.75 inches).