Kanye West gets 'Kanye'd' by onstage heckler at Glastonbury 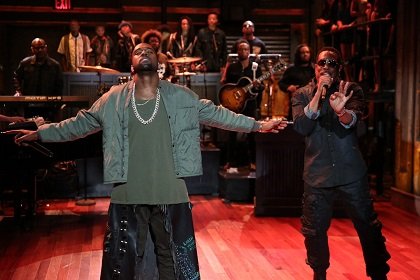 On Monday night, September 9, 2013, Kanye West swung by "Late Night with Jimmy Fallon" with last-minute plans to perform "Bound 2" from his album, "Yeezus." Smartly, he orchestrated his rendezvous to include The Roots and Charlie Wilson. Lloyd Bishop/NBC

(CNN) — Now Kanye West knows how it feels to get upstaged, even if just for a few seconds.

It's no secret that more than a few people were unhappy with the decision to make the American rapper the headlining act of the five-day British music festival. At least 15,000 signed a petition to cancel his slot.

When the petition went nowhere, British comedian Lee Nelson -- whose real name is Simon Brodkin -- took matters into his own hands. Wearing a shirt that said "Lee-Zus," a parody of West's nickname and self-titled album "Yeezus," Nelson bounced across stage with a working microphone in hand.

He made it a few seconds before a guard pulled him offstage. West reportedly tried to continue before halting "Black Skinhead" and restarting, going on to perform a 30-song set.

Nelson claimed credit for the stunt on Twitter, boasting that he "Kanye'd Kanye," a reference to all the times West has interrupted someone onstage -- specifically, that time he interrupted Taylor Swift at the Video Music Awards.

"Some people were saying Kanye shouldn't headline Glastonbury so I thought I'd give him a hand," Nelson tweeted. "I Kanye'd Kanye. That was for you @taylorswift13."

High-profile pranks are Nelson's thing. He made his way into a photograph with England's football team before last year's World Cup in Brazil.