Hamilton College Choir to Perform in Baltimore on March 14 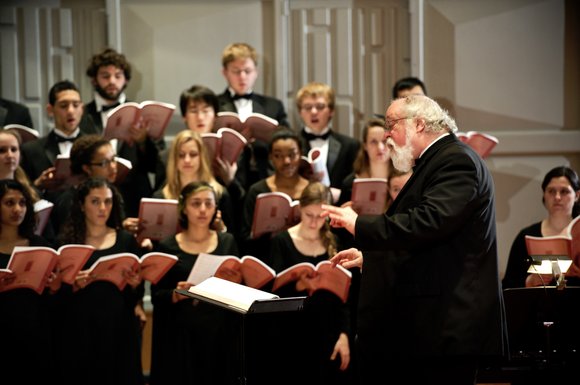 Clinton-NY — Clinton, N.Y. -- The Hamilton College Choir will visit Baltimore during its annual March tour. The 64-member choir will perform on Saturday, March 14, at 7 p.m., at Old Otterbein United Methodist Church, 112 West Conway St. The performance is free and open to the public.

The program for Hamilton’s March 2015 tour is a varied one that includes sacred and secular music including Hogan’s “I Can Tell the World,” Joel’s “And So it Goes,” Bach’s “Alles Was Wodem Hat,” and Schütz’s “Deutsches Magnificat.”

The Hamilton College Choir boasts an uninterrupted tradition of fine choral singing that dates back for over a century. It is directed by G. Roberts Kolb, professor of music and director of choral music at Hamilton since 1981.

G. Roberts Kolb in the foreground