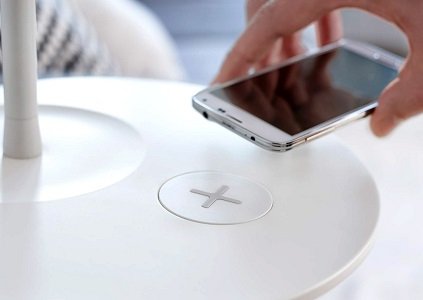 Ikea is launching a new range of high-tech furniture that will wirelessly charge your smartphones and tablets. (Photo courtesy/Ikea)

NEW YORK (CNNMoney) — Ikea is launching a new range of high-tech furniture that will wirelessly charge your smartphones and tablets.

The collection features a small selection of bedside tables and lamps with built-in charging spots that will be sold in Ikea's U.S., U.K. and European stores starting in mid-April.

"People hate cable mess. They worry about not finding the charger and running out of power," said Ikea's Jeanette Skjelmose, a manager of lighting and wireless charging, in a press release. "Our new innovative solutions, which integrate wireless charging into home furnishings, will make life at home simpler."

The Home Smart furniture contains "+" signs that indicate where you should rest your mobile device for charging. And, yes, you'll have to plug your new furniture in.

Customers who don't want to replace the Ikea furniture they've already purchased will also be able to buy "charging pads" that kinda sorta blend into your existing Bråviken, Hemnes, Nornäs, and other furniture.

Or, if you are seriously committed, Ikea sells a hole saw that will drill a circle in your furniture that's just the right size for an Ikea wireless charger (sold separately).

The Home Smart Ikea furniture uses a wireless charging standard known as Qi. It can be found in some Windows Phones and Android phones, including the just-announced Samsung Galaxy S6, which is expected to go on sale next month.

The iPhone and older versions of the Galaxy S don't support wireless charging, but Ikea said it will sell special charging covers for the iPhone 4, 4S, 5, 5S and 6, as well as the past three generations of Samsung Galaxy S phones. After slipping the cases on your phone, they'll work with just about any wireless charger, including Ikea's.

Wireless charging hasn't fully taken off, but it has been embraced by a few key players. Last year, Starbucks began rolling out wireless charging stations at its coffee shops.