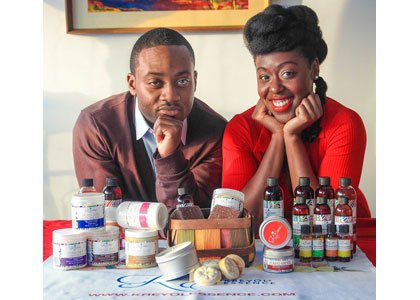 The owners of Kreyol Essence, a company that creates hair and skin care products based on Haitian traditions. (Photo courtesy/Kreyol Essence)

For some women, having a bad hair day can lead to many other problems.

If you listen to Yve-Car Momperousse, there cannot have been many who have experienced worse than she after a trip to a hair stylist about seven years ago.

“I called it a hair catastrophe,” said Momperousse, who has managed several nonprofits in three states including Pennsylvania, New York and New Jersey. “I had been growing my hair naturally, and I went to a hairdresser and asked to have my hair pressed. The hairdresser decided to use a lot of heat to straighten my hair and burned me badly.”

Momperousse said she turned to her mother back in Haiti for a remedy, as she had done with countless other ailments. Her mother reached for old reliable, Haitian Black Castor Oil. That’s when Momperousse decided to start Kreyol Essence, a company that creates skin and hair care products based on Haitian traditions.

“I knew the Haitian Black Castor Oil my mother used on me as a child to strengthen, grow, and moisturize my mane was the one thing that could restore my natural hair to its former glory,” she said. “It wasn’t readily available in my neighborhood [in Philadelphia] and I could not find it on line. My mom had to send me some from her Haiti stash, so I decided to make sure that I, and anyone else who needed the oil, could have access to it by creating Kreyol Essence.”

Momperousse, who operates the business with her fiancée, Stéphane Jean-Baptiste says that another reason for starting the business was to help stimulate Haiti’s fallen economy.

She had planned to open in 2010, but the terrible earthquake that rocked the country forced her to focus on relief work rather than being an entrepreneur.

“That’s where my mom, who is always the voice of reason, came in again and told me that I had to stop the relief work and follow my dreams,” Momperousse said. “Now more than ever, our people will need jobs and a way to be self-sufficient and my mom said to me that when the donations stop, how will the country survive? She said she needed me to persevere in making this dream a reality, as the lives of many were at stake.”

Helping to provide jobs for many in her homeland has only made the success of Kreyol Essence all the more enjoyable, according to Momperousse.

She and Jean-Baptiste say it was their destiny and their responsibility to have a social impact, which remains the core of their business model.

Momperousse says the company will eventually create jobs for as many as 400 women and farmers, and by planting castor beans they are tackling soil erosion, deforestation and green house gas emissions.

“This helps with the environment and it saves the lives of those who survived the earthquake,” she said, adding that Kreyòl Essence provides the only 100 percent organic Haitian castor oil on the mainstream market.

The oil, extracted by hand using traditional Haitian methods, has proven to deliver unparalleled healing and hydrating properties, she said.

The company also offers a variety of other organic hair and skin products, including handcrafted soap that’s packed with premium ingredients like goat’s milk and citrus peels that’s designed to gently exfoliate skin.

“The Haitian approach to caring and maintaining hair is closely aligned with herbal medicine. Many women rely on ingredients found in the mountains, family recipes, and what we call the country’s liquid gold, Haitian Black Castor Oil,” she said.

“Food is also used in cosmetic concoctions.When you purchase Kreyol Essence products you are investing in yourself and the people of Haiti. So, support the beautiful women and men who hand make these products and celebrate social and beauty innovation.”

For more information about the Kreyol Essence, visit: www.KreyolEssence.com.