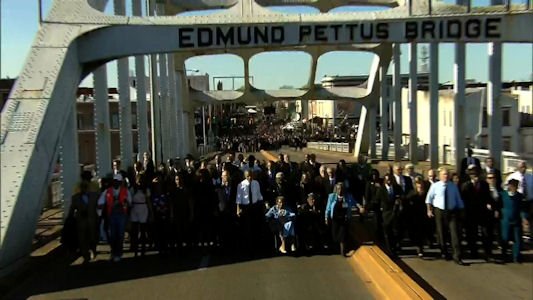 Thousands of people are gathered at the foot of Edmund Pettus Bridge in Selma, Alabama on March, 7, 2015 to commemorate 'Bloody Sunday', when demonstrators faced violence as they attempted to march from Selma to Montgomery to demand the right to vote for black people. It captured the nation's attention and paved the way for the Voting Rights Act of 1965. (CNN)

SELMA, Alabama (CNN) — In a passionate speech about racial progress in America, President Barack Obama on Saturday told thousands of people who gathered here to commemorate the 50th anniversary of "Bloody Sunday" that "our march is not yet finished. But we are getting closer."

Obama emphasized that a day of commemoration is not enough to repay the debt paid by the marchers who were brutally beaten 50 years ago as they demonstrated for voting rights.

"If Selma taught us anything, it's that our work is never done," the President said near Edmund Pettus Bridge, where the confrontation between authorities and marchers was captured in film and photographs that jolted the nation.

The President said that what civil rights marchers did years ago "will reverberate through the ages. Not because the change they won was preordained; not because their victory was complete; but because they proved that nonviolent change is possible; that love and hope can conquer hate."

He hailed the marchers as heroes.

The President said that "the Americans who crossed this bridge, they were not physically imposing, but they gave courage to millions. They held no elected office. But they led a nation."

The "Bloody Sunday" anniversary marks 50 years from the day hundreds of people were brutally attacked by Alabama state troopers as they marched from Selma to Montgomery, Alabama, to protest racial discrimination in voter registration. About 600 people participated in the planned 50-mile journey on March 7, 1965.

The marchers were protesting discrimination that kept black people from voting. But as the marchers approached the foot of the bridge, state troopers used force and tear gas to push them back.

As events were underway Saturday in Selma, hundreds of people marched across the Brooklyn Bridge in New York to symbolize their unity with the Alabama commemoration.

Television coverage of the event in 1965 triggered national outrage and eventually led Congress to pass the landmark Voting Rights Act of 1965, which mandated federal oversight over elections in states with histories of discrimination.

Lewis: We must finish the work

Many of the nation's leaders, activists and celebrities were in Selma on Saturday attending various activities taking place in memory of the historic event.

On Saturday, Rep. John Lewis -- one of the demonstrators bloodied by troopers 50 years ago -- and nearly 100 other members of Congress from both parties joined the President at the bridge in Selma -- a bridge that still bears the name of Pettus, a Confederate general who was also a Ku Klux Klan leader.

"We must use this moment to recommit ourselves to do all we can to finish this work. There's still work to be done," said Lewis, adding this is an opportunity to "redeem the soul of America."

The President said that though progress has been made, racism is still too prevalent in America.

"We just need to open our eyes, and ears, and hearts, to know that this nation's racial history still casts its long shadow upon us," he said. "We know the march is not yet over, the race is not yet won, and that reaching that blessed destination where we are judged by the content of our character -- requires admitting as much."