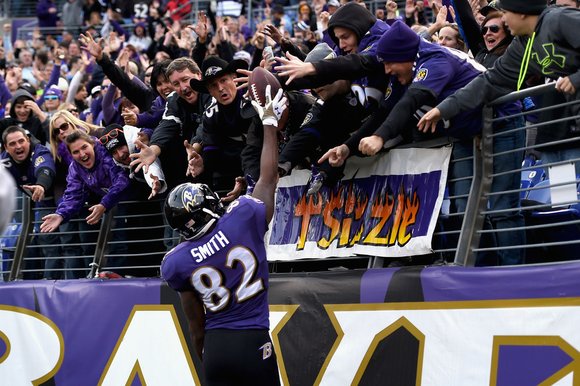 Torrey Smith sends his love and thanks to the City of Baltimore and the fans. Baltimore Ravens

BALTIMORE — The Baltimore Ravens and wide receiver Torrey Smith will be parting ways. Smith made the announcement on his blog by saying that he will be on to “the next chapter of his life and football career.” Losing Torrey Smith is something that will not only affect the Ravens as a team. It will also affect the Baltimore area community because of all of the great things that the Torrey Smith Foundation did over the past four years.

There are few athletes who have the deep relationship with their city that Smith has with Baltimore. He has adopted Baltimore as his new home. He and his wife Chanel were athletes at the University of Maryland. Their love for the Baltimore area sprouted from there. It was a dream comes true for Torrey Smith to be drafted to the Ravens. Leaving the city will be tough for him.

“These last four years have been amazing for me. I have been able to grow as a player, and more importantly, as a man. To the fans, it is tough to leave a city that I now call home. I will be playing for a different organization, but I will remain committed to the City of Baltimore. I will continue to give back and help build a better future for our young men and women. MY COMMITMENT TO THE CITY IS FOR LIFE.”

The Torrey Smith Foundation has done so much to impact the community. They have opened numerous reading rooms that they call a “reading oasis” in various schools in the area. The Foundation has held a variety of events ranging from a celebrity waiter night at Ruth’s Chris Steakhouse to Thanksgiving and Christmas gatherings for less fortunate students and their families. To say that he was involved in the community is an understatement.

His foundation has a simple goal and mission statement: “The mission of the Torrey Smith Foundation is to better the lives of children up and down The Beltway by providing educational support, opportunities and resources. The goal is to have touched the lives of more than 35,000 children by 2016.”

Torrey Smith will be missed on the field as well. His ability to stretch the football field allowed the other receivers to have more space to operate in the middle of the field on intermediate routes. He led the Ravens in average yards per catch last year by averaging 16.9 yards per reception. Very few receivers posed the kind of deep threat to opposing defenses like Smith did. He drew more pass interference/illegal use of hands calls than anyone else in the NFL last season. His 11 touchdowns led all Ravens wide receivers.

The younger receivers on the team such as Kamar Aiken, Michael Campanaro and Jeremy Butler have all said Smith was real to them and was someone that they can go to when they needed to talk about anything. Smith also firmly endorsed his quarterback Joe Flacco whenever the silly “Is Joe Flacco an elite quarterback” questions where directed towards him.

Unfortunately, due to salary cap restrictions, the Ravens could not keep Smith. The Ravens only have $4.5 million left in salary cap space at this point. Torrey Smith was sure to garner a better deal on the free agent market. His desire was to get a deal done before free agency started, but it simply wasn’t an option because of cap space. The San Francisco 49ers are said to be the team that will sign Smith. They are in need of a burner at wide receiver. Their general manager, Trent Baalke said that he likes receivers that can run which is exactly what Smith brings to the table. He should fit in nicely with 49ers quarterback Colin Kaepernick’s deep throwing ability.

Smith is a man of his word and he intends to continue to be involved with the Baltimore community. His level of involvement will be limited however because of his commitments to the new team/city that he plays for.