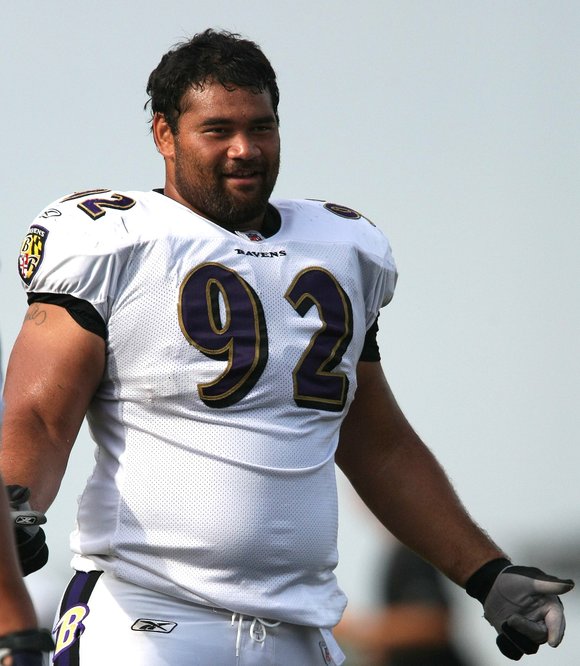 At 31 years old, Ngata is a five-time Pro Bowler. He has posted 528 total tackles, 25.5 sacks and five interceptions in nine seasons with the Ravens. Baltimore originally selected Ngata in the first round (12th overall) of the 2006 NFL Draft. (Baltimore Ravens)

BALTIMORE — The Baltimore Ravens had some salary cap issues as they got closer to the official start of the 2015 NFL season. They only had $4.5 million in salary cap room. It’s very interesting how some moves can have a domino effect. The Detroit Lions lost out on the bidding war for defensive tackle Ndamukong Suh. As a result, they had a gaping hole in the middle of their defensive line.

Haloti Ngata had a very large cap number and was not willing to redo his deal to lower the impact on the salary cap. He was set to have a cap hit of $16 million. The Ravens and Lions reached an agreement to send Ngata to Detroit in exchange for a fourth and fifth round pick in the 2015 NFL Draft.

“Haloti has been an outstanding player for us for many years,” Newsome stated. “He consistently showed tremendous leadership in our locker room and on the field. At times, he was one of the NFL’s most dominant players.”

This trade was able to happen because of the way that rookie defensive tackle Timmy Jernigan stepped up during the four game absence of Ngata. Ngata was suspended for four games because he tested positive for Adderall which is a violation of the NFL’s substance abuse policy. Second year nose tackle Brandon Williams played very well also. Williams playing nose tackle allowed Ngata to change to a three technique in the Ravens 3-4 defensive scheme.

At 31 years old, Ngata is a five-time Pro Bowler. He has posted 528 total tackles, 25.5 sacks and five interceptions in nine seasons with the Ravens. Baltimore originally selected Ngata in the first round (12th overall) of the 2006 NFL Draft.

Ngata tied rookie linebacker C.J. Mosley to lead the Ravens with two interceptions last year. He also registered two sacks on the season. The move will free up $8.5 million in cap space for the Ravens. They now have a total of 11 picks in the 2015 NFL Draft and will need to add some depth along the defensive line. The trade will reunite Ngata with former Ravens defensive assistant and current Lions defensive coordinator Teryl Austin.

Added head coach John Harbaugh: “Haloti is a great player, but an even better person. He has been an anchor of our success for many years. We appreciate everything he has done for our organization and the Baltimore community. We wish him and his family nothing but the best.”