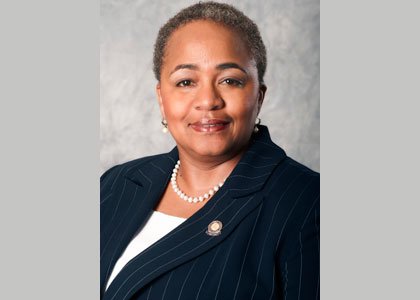 Tanya V. Rush, the Associate Vice President for Student Affairs at Morgan State University was honored at the White House as an HBCU Champion of Change. (Courtesy Photo)

On February 24, 2015, the White House recognized Tanya V. Rush, the Associate Vice President for Student Affairs at Morgan State University (MSU) in Baltimore, as an HBCU Champion of Change. For over thirty years, Rush has served students at MSU, which is also her alma mater. Ten other faculty and staff members who work at Historically Black Colleges and Universities (HBCUs) were also recognized as HBCU Champions of Change during Black History Month.

According to a press release issued by The White House Office of Communications, "HBCU Champions of Change are honored for their outstanding work to cultivate a rich learning environment and build initiatives that promote post-baccalaureate success."

“For more than a century, HBCUs have been exemplars in producing African American college graduates who lead their fields. A recent from the National Science Foundation revealed that 21 of the top 50 institutions for producing African American graduates who go on to receive their doctorates in Science and Engineering (S&E) are HBCUs,” Heather Foster, Associate Director of the Office of Public Engagement, noted on the Champions of Change White House blog.

As a part of the recognition, The White House live streamed a panel discussion featuring the HBCU Champions of Change. The inaugural event was moderated by E! News co-host and HBCU alum, Terrence Jenkins. Congressmen, guests of honorees and students enrolled at MSU and other institutions were in attendance. Two student leaders reportedly nominated the woman known on Morgan’s campus as “Mama Rush.”

“I was just grateful for the nomination," Rush said, "I felt as if I could represent my Morgan family, and the community in which I serve, because I realize that it is never about me. It’s just the ability to represent those that I serve with. It was overwhelming and a little emotional, when I looked at the other honorees and heard their contributions,” Rush said.

In her position, Rush represents the Vice President for Student Affairs in various capacities and special projects. She works to facilitate the successful matriculation of students, by helping to address their co-curricular needs, including financial assistance,

residence life, student activities and governance, recreation, spiritual growth and development and student health. The HBCU Champion of Change is aware that some MSU students who study and live far away from home may need support and someone to hold them accountable.

“At Morgan, I am a member of a family and a community that endeavors to tie together the various life aspects and academics to support fulfillment of the entire person. We realize that failure to do so can result in students’ academic achievement being compromised by a breakdown in other key life aspects,” Rush said. “I do believe that at an HBCU there is something different about the commitment and the support that is provided. We hug them. We give them a high five. You have faculty, staff and students and even our director of public relations who are willing to take the time to maintain an open door policy.”

Rush remarked that she feels blessed to have cultivated and maintained life-long relationships with generations of her students.

“Some students do not need Mama Rush’s brand of nurturing but many do. Even if they don’t need it, they get it anyway; it’s who I am and I see no reason to change now. It’s an investment in the future!” Rush said on the White House blog.

To learn more about the HBCU Champions of Change, please visit