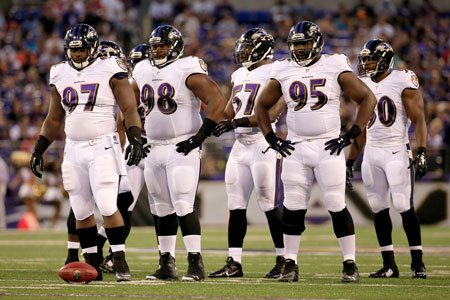 The Baltimore Ravens were very pleased with the progression that second year defensive tackle Brandon Williams made last season. He took over as the zero technique in the Ravens 3-4 defense. That position was formerly occupied by Haloti Ngata.

The impressive play of Williams last season along with the emergence of rookie defensive tackle Timmy Jernigan allowed the Ravens to trade Ngata to the Detroit Lions. The move was done to save $8.5 million in salary cap space since Ngata wouldn’t restructure his contract to reduce his $16 million cap number.

Brandon Williams was a third round draft pick for the Ravens in the 2013 NFL Draft. One of the things that he was known for was his upper body strength. Williams is able to do a handstand and walk on his hands despite being 6-1, 335 pounds. That strength is exactly what allows him to generate inside pressure and push the pocket back into the quarterback’s lap. It also allows him to occupy two gaps, which ties up two blockers and allows linebackers C.J. Mosley and Daryl Smith to have a free run at the ball carrier.

Ngata was not in the lineup for four games last season thanks to a suspension for violating the NFL’s substance abuse policy. Williams had to team up with Timmy Jernigan and hold down the fort. The Ravens had dismal playoff hopes at that time. Finding out that the team would suffer the loss of Ngata didn’t make things seem much better. The Ravens went 3 – 1 in their last four games, all without Ngata. That put them back into playoff contention.

Stepping into the shoes of Haloti Ngata won’t be a first time thing. Williams did so well, especially against the run. He became a classic two gapping defensive tackle. The Ravens moved Ngata to the three-technique after Williams took over his old job. The two of them were very disruptive against opposing defenses. Both Williams and Ngata are strong and athletic players that consistently get penetration into the opposition’s backfield. Their last victory together was a divisional playoff game against the Pittsburgh Steelers last season in which they dominated the offensive line.

Williams benefited greatly from being able to learn from a veteran like Ngata during his first two years in the NFL. “The dude is a beast,” Williams said of Ngata. “He’s Haloti Ngata. I first came here and saw him, I was like, `That’s definitely how you’re supposed to look when you’re playing football.’ So I definitely look up to him and Chris Canty. Trying to be a pro, trying to eat right, trying to work out, trying to emulate them as much as possible.”

There is little doubt that the Ravens will miss the locker room leadership that Ngata brought to the team. Last year was the first time that Haloti Ngata didn’t lead the Ravens defensive line in snaps. He finished with 504 snaps, second only to Brandon Williams’ 524 snaps. Williams went from only getting eight percent of the defensive line’s reps in 2013 to playing the most reps by a defensive lineman in 2014. His 524 snaps last season was the most by a Ravens nose tackle since 2008.

The 2015 season will be the year for Williams to truly step up and become the anchor of the Ravens defensive line. The Ravens may draft an interior defensive linemen to add depth to the roster. They have used early picks in the position in the last two years. The good thing is that they don’t have to look for a starter at defensive tackle.