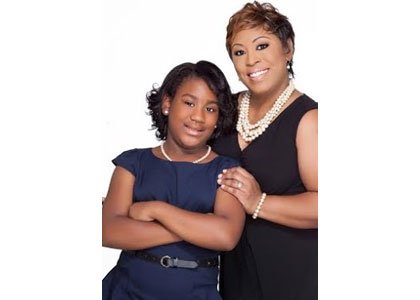 Mother and daughter team Jayana and Cheryl will be keynote speakers at a conference in Atlanta on April 24-25, 2015.

Cheryl Wood, an international speaker, business coach, author and empowerment champion was selected to receive a 2015 Mother of Achievement Award from American Mothers, Inc. Wood is based in Prince Georges County, Maryland but has spoken all over the country and the Bahamas teaching women how to grow a successful and sustainable business. The award reportedly recognizes “outstanding women whose positive influences, talents and community service has made a significant impact in the lives of children and families.” The mother of three, who also speaks to girls about leadership, has won numerous awards, including the 2013 Willie Jolley Motivational Speaker Award.

Motivational speaker and entrepreneur Cheryl Wood was recently selected to receive a 2015 Mother of Achievement Award from American Mothers, Inc.

“The work I do with women and girls empowers them to walk into their greatness. My target audience is women in business in those first five years of trying to learn how to clarify their message and who they want to serve,” Wood said.

Wood has made impressive strides in her field since 2009, when she once worked as a legal secretary. Like many working mothers, each weekday morning she dropped her children off at before care at six o’clock in the morning and did not see them again until the evening.

“I felt like I never saw my own kids, and when I did see them, I felt like I gave them the worst parts of me,” Wood said.

A desire to try something different led Wood to start a t-shirt business called Moms R The Best, which became a part-time venture. Slogans printed on the t-shirts were aimed at empowering and uplifting mothers. The latter part of 2010, Wood was invited to speak at an annual women’s conference that was held at Morgan State University. The event was structured to teach other mothers how to start their own businesses. Wood had not previously spoken to a public audience.

“After I did that, I knew that this is what I was supposed to be doing. Since then I have been growing the speaking business,” Wood said. “I felt fulfilled and I felt like I helped other people. That was the thing that I think was missing from my life.”

Although the mompreneur left her 15-year career behind, Wood did not immediately land paid speaking engagements. While perfecting her craft, she was willing to speak to audiences as few as two people.

“You have to believe in your value first to present it confidently to get paid what you are worth. I didn’t have the confidence, because I came from a legal background,” Wood said. “For the whole first year that I spoke, I spoke for free. I considered it as my year of experience and exposure. I know that experience and exposure will eventually lead you to profit.”

Others began to notice Wood’s speaking talent. Booking requests began to include corporate conferences and events.

“The audiences started to be larger and more influential, then the journey started to grow to another level,” Wood said joyfully.

Wood travels often but maintains a healthy work-family balance. She takes her family with her whenever she can, or she flies home the same day she speaks in other cities. The thought leader inspired her daughter, Jayana Wood, to follow in her footsteps. Jayana wrote her book, “Opening My Imagination,” at the age of nine. The 11-year-old has already been featured as a keynote speaker at three events.

“My mother had written three books and she inspired lots of adults to do what they wanted to do in life, and so I wrote my book to inspire kids to do what they wanted to do at a young age. They don’t have to wait until they are an adult or older,” Jayana said. “I think I am learning that it is hard work. You can’t just sit down and think it is going to come to you. You have to get up and work hard for what you want to achieve in life.”

Jayana and Cheryl were hired to speak at a mother/daughter retreat in Atlanta, Georgia on April 24-25, 2015. Additionally, Jayana is currently working on her second book. On June 27, 2015, her mother will release an anthology that includes stories of 25 women from across the country called “The Fearless Living Experience.” Cheryl’s radio show, “Play Time Is Over,” features business guests. It streams live online via www.listenvisionlive.com every Tuesday from 2-3 p.m. EST. Visit www.cherylempowers.com for more information.