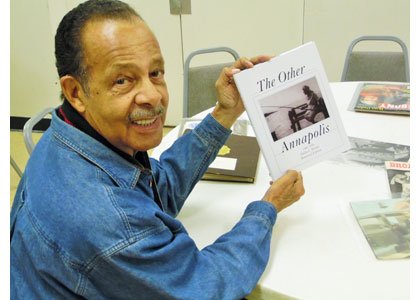 Errol Brown, a second-generation historian, shows the book “The Other Annapolis: 1900-1950” written by his father, the late Philip Brown. The book along with 70 to 100 photos are part of The Other Annapolis Exhibit which will be on display at the American Legion Cook-Pinkney Post No. 141 through June 2015, The exhibit chronicles the lives of “colored” people through vintage photos before the civil rights movement up to the present time. The exhibit is free and open to the public. (Photo: Andrea Blackstone)

What was life like for “colored” people in Annapolis and other parts of Anne Arundel County? Errol Brown, a second-generation historian, can provide an in-depth analysis about people like Wesley A. Brown— the first black Naval Academy graduate. A photo mounted on a wall at American Legion Cook-Pinkney Post No. 141, located at 1707 Forest Drive in Annapolis tells a visual story of the midshipman’s graduation day. Errol explained that when James Brown performed at Carr’s Beach in 1965, he rode into Annapolis in a convoy of five pink Cadillac limousines. The performer reportedly drew a record crowd.

Errol, 71, provides insight about living in the other Annapolis during previous times. The Ellicott City resident offers a plethora of history lessons through his exhibit, "The Other Annapolis.” The exhibit chronicles the lives of “colored” people and is open to the public at the American Legion Cook-Pinkney Post No. 141 through the end of June.

Vintage photos before the civil rights movement up to the present time are showcased. Many of the photos in the exhibit were taken by “colored” photographer, Thomas (Tommy) Baden. Additionally, books and collectibles are scattered around tables for review. These items provide additional information about Maryland’s “colored” heroes,

“It’s an exhibit of "The Other Annapolis” collection. What we do is a time tunnel. We start with Benjamin Banneker. He was one of our oldest Maryland heroes,” Errol said, pointing toward information about Banneker, during his guided tour.

Stories that Errol shared highlight the accomplishments and resilience of nationally and locally known changemakers. A portion of the photos displayed are from the late Lulu Hardesty’s collection. Others came from Errol’s personal collection that he inherited from his parents, the late Rachel Hall Brown and the late Philip Brown.

“They collected all of their lives. Each one of them lived to be one hundred years old and they were married 77 years. They taught school for a combined 85 years. They kept everything. They were keepers,” Errol said.

Like his parents who made notable contributions in education, Errol is a trailblazer. At 18 years old, he enlisted in the U.S. Army. He later worked in the airline and insurance industries. The entrepreneur started his own transportation business. Errol was the first black person to own a messenger/courier service and limousine business in Columbia, Maryland in the 1970s. Exhibiting cars along with information was a hobby that helped the industrious veteran to utilize his skills a historian. Errol served as president of the Banneker-Douglass Museum Foundation, the president of the Friends of the Banneker-Douglass Museum and is a founder of the Blacks of the Chesapeake Foundation.

“When my mother began to get older, and she was part of the Banneker-Douglass Museum, she brought me in the museum to help. After I got into it I fell in love with it,” Errol said. “Growing up with my mother, father and teachers exposed me to black history. Loving our history came to me naturally.”

The late Philip Brown is the author of “The Other Annapolis: 1900-1950.” Errol republished the book in 2011. The memorial edition is available for sale at the American Legion Cook-Pinkney Post No. 141.

“I usually let people browse on their own. As they browse, they usually come back and ask, ‘What is this?’ A lot of them come back and want to buy the book, “The Other Annapolis.””

Some Annapolitans purchase soul food dinners at the American Legion Cook-Pinkney Post No. 141 on Fridays. While there, many have taken a look at Errol’s exhibit.

“I love the pictures. I see some people that I know. The exhibit is great. It is good for the community. It is good for this town,” Larry Edwards, an Annapolis resident and member of the American Legion Cook-Pinkney Post No. 141 said.

A part of the American Legion’s mission is to support the community and children. Visitors of all ages are invited to view the exhibit, which is open from 3 p.m. to 11 p.m. Tuesday to Thursday and Saturday. Friday hours are from noon to 11 p.m. To view the exhibit by appointment, contact Errol Brown at 443-995-4571.