Forever Stamp Image is a Painting Resembling a Photograph 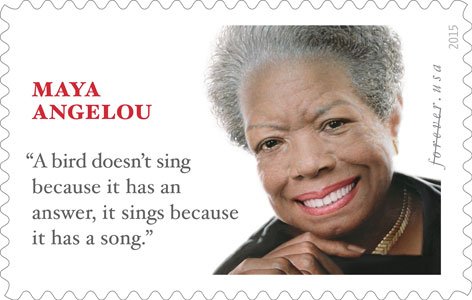 WASHINGTON — The U.S. Postal Service recently previewed the Dr. Maya Angelou Forever Stamp image and announced that the First-Day-of-Issue stamp dedication ceremony will take place on April 7, 2015 at 11 a.m. at the Warner Theater in Washington, D.C. The event is free and open to the public. Seating is limited. The stamps may be pre-ordered now at this link for delivery shortly after April 7.

As an author, poet, actress, and champion of civil rights, Angelou (1928–2014) was one of the most dynamic voices in 20th-century American literature. The book, “I Know Why the Caged Bird Sings,” an autobiographical account of her childhood, gained wide acclaim for its vivid depiction of African-American life in the South.

The stamp showcases Atlanta-based artist Ross Rossin’s 2013 48” x 48” oil-on-canvas portrait of Angelou. The large hyper-realistic painting is part of the Smithsonian National Portrait Gallery's collection, where it will be on display through Nov. 1. The stamp features this quotation by the pioneering author: “A bird doesn't sing because it has an answer, it sings because it has a song.”

The stamp pane includes a short excerpt from Angelou’s book, “Letter to My Daughter.” It reads: “Try to be a rainbow in someone’s cloud.” Art director Ethel Kessler of Bethesda, Maryland, designed the stamp. Customers are encouraged to use social media to spread the news about the stamp using #MayaForever.

“Like an x-ray,” explained Rossin, “My brush searches beyond the façade, reaching the God particle, the spiritual soul that embodies us all. I see all the subjects of my paintings as humans. All I want to do is paint the truth. My paintings don’t look like photographs; photographs look like my paintings. The objective of my art is to transcend hyperrealism. It is nothing else but a language that ensures the connectivity between the viewer, creator and the subject of my paintings. My ultimate goal is to bring the invisible energy through to this visible medium.”

“I always wanted to paint Maya as she was a voice that inspired millions— not just as an individual but as a legendary poet and a civil rights icon who transcended generations,” Rossin added. “I was compelled by the challenge to portray her forgiving smile and her aura of unconditional love and understanding that comes across when having a conversation with her.”

Rossin is a good friend of Ambassador Andrew Young, having forged a close personal relationship with the artist since rendering a portrait of Young several years ago, which also hangs in the National Portrait Gallery.

Knowing that Angelou’s birthday was coming up, he felt the urge to introduce Rossin to her in 2013.

“I applaud the U.S. Postal Service for their decision to honor my beloved friend Maya with a Forever stamp, and for using Rossin’s portrait of her for this perennial image,” said Young. “He is a master portrait artist— a prodigy. It is an honor to be immortalized by his brush stroke.”

“During my visit to her Winston-Salem, N.C. home I spoke with Maya for several hours about her life journey and courage of finding the light in the midst of her darkness. It is her energy, the God Particle, which struck me. Later that evening, Oprah Winfrey hosted a birthday party for Angelou. This was the critical moment when I saw Maya through the eyes of others. My personal experience around Maya’s aura led to the creation of an intimate yet universal painting, which later Maya enthusiastically approved.”